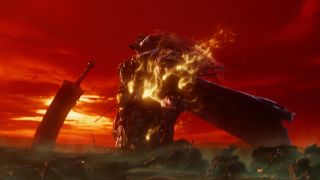 Elden Ring - From Software's upcoming collaboration with Game of Thrones creator George RR Martin - looks to build on the Western high fantasy and ruined worlds of the concluded Dark Souls series, only on a much grander scale. And after the fixed main characters of recent From Software titles Sekiro and the PS VR exclusive Deracine, it sounds like Elden Ring will also be a return to a protagonist of the player's own making.

In an extensive interview with IGN, From Software president Hidetaka Miyazaki delved into the design philosophy of Elden Ring, which leaked prior to E3 2019 before unveiling a proper (and plenty cryptic) reveal trailer during the Xbox E3 2019 presentation. "There is no fixed main character in Elden Ring," Miyazaki said. "We mostly leave it up to the player to decide the characteristics and personality of the character they create." In contrast to the talkative (by From Software standards) Sekiro/Wolf and his stoic personality, it sounds like the hero of Elden Ring will take after the Dark Souls and Bloodborne leads who communicate via their actions and silent dialogue choices rather than speaking parts in cutscenes.

Of course, that's no guarantee of Elden Ring having the extensive character creation tools of Dark Souls and its ilk that let you craft every facet of a righteous hero, a freakish Smurf person, or anything in between. But Miyazaki positions Elden Ring as "a more natural evolution of Dark Souls," expanding into a much larger open world. "The gameplay is not so far from Dark Souls," he said. "That doesn’t mean that the gameplay will be identical, but you could say that Elden Ring belongs to the same genre."

In previous interviews, Miyazaki has shed light on George RR Martin's contribution to Elden Ring, with Martin crafting the mythology that takes place long before the events of the game. "By having him write about a time the player isn’t directly involved in, he is free to unleash his creativity in the way he likes," Miyzaki said. "Furthermore, as From Software, we didn’t want to create a more linear and story-driven experience for Elden Ring. Both issues could be solved by having Martin write about the world’s history instead."

Elden Ring also adds horseback riding to help you cross the massive open world, though you won't be strolling through populated towns like in, say, The Witcher 3. "Villages will be the dark dungeon-like ruins that you have come to expect from us," Miyazaki said. "Creating a more open game is a big challenge for us. If we were to add towns on top of that, it would become a bit too much, so we decided to create an open-world-style game focused on what we are best at."

Miyazaki, who won a Lifetime Achievement award at the Golden Joystick Awards 2018, even waxed philosophical about why From Software's worlds tend to be such a heady, heart-rending mix of soul-crushing despair and golden slivers of hope. "Light looks more beautiful in darkness," he said. "When there is something beautiful in the middle of a wasteland, we are able to appreciate it more. One jewel doesn’t look like much when you have a pile of them, but if you find one jewel in the midst of mud, it is worth so much more." If Miyazaki doesn't mind, I'd like that line to go on my tombstone someday.

Check out the other best games of E3 2019, or see what's happening this week in games and entertainment with our latest Release Radar: