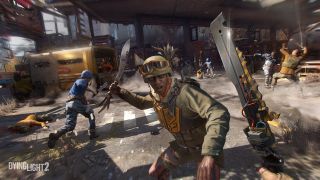 We've been waiting on Dying Light 2 for some time now and while we still don't have a confirmed release date other than spring 2020, you can pre-order Dying Light 2 at Amazon for $50. This is another one of the great Amazon Prime Day game deals available, but you'll need to be quick because Prime Day is coming to an end very shortly.

Dying Light 2 - as you'd guess from the name - is the second game in the Dying Light franchise, which sees the player thrust into a zombie apocalypse. You need to utilise parkour mechanics to escape and scale buildings, because these zombies ain't slow. It's also got two to four player co-op for the entire campaign, so you can enlist the help of a couple of buddies. Especially since co-op is going to be one of the coolest parts of the game.

Did you know that Dying Light 2 is also inspired by both The Witcher 3 and Game of Thrones? If that doesn't make you want to play it as soon as possible then I don't know what will, because if it even comes close to the impact both of those products had, then it should be one of the best games of 2020. You don't want to miss out on that, do you?