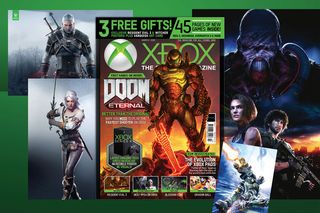 Doom Eternal aims to redefine how first person shooters should be played, with a deeper (not to mention more vertical) experience in the latest entry in the iconic series. In this month's Official Xbox Magazine, find out what's new and what's improved in Doom Eternal from our exclusive hands-on time with the game.

Doom Eternal is the best in the series to date, bigger and better even than 2016's excellent Doom reboot. With more demons to slay than ever before, more BFGs to do it with, and a ton of new toys to help you traverse Hell, you'll be ripping and tearing to your heart's content when the game lands in March. In the meantime, OXM got hands-on with the game and we report from our extensive play-testing of id's new FPS.

"Doom is junk food, and we're proud that it's junk food," says id Software's Marty Stratton. "But that doesn't mean it can't have a ton of nutrition in it. And that's what we want people to really experience - it's super fun on the outside but it's smart on the inside, and we've really refined the experience."

OXM talks to the game's producer about fast food, fast frame rates, and refining Doom Eternal's core mechanics to get players playing in "the right way" in this month's mag.

From the original big and chunky Duke controller to the slick Elite Series 2 pad, OXM charts the history of Xbox controllers to date and talks to the 'Father of Xbox' Seamus Blackley about how the original controller came about.

We have more Xbox Series X news, as we reveal more about the amazing tech specs, incredible power, and 8K visual potential of Microsoft's next-gen powerhouse. Looking to lead an alternative life on Xbox for a little bit? We break down the most important RPGs ever to appear on Xbox, from the Witcher to Mass Effect. We have game previews galore as we get hands-on with and go behind the scenes of some of the most exciting games coming to Xbox this year, such as Resident Evil 3, Bleeding Edge, Grounded, Session and more.

All the latest Xbox games reviewed this month

Our expert reviewers give their trusted opinions on the latest game releases, including Dragon Ball Z: Kakarot, Journey To The Savage Planet, and more, and we detail all the best games, hardware and streaming you can enjoy on your Xbox this month! Got an Xbox? Then you need Official Xbox Magazine!