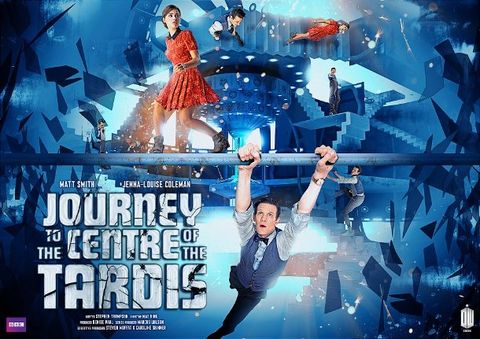 Next week in Doctor Who , the Doctor and Clara take a "Journey To The Centre Of The TARDIS”

• It’s an okay episode, but a little disappointingly underwhelming for a story with such a deliciously tantalising title. It’s a fairly straightforward action adventure.

• There are a couple of “Wow!” moments, but too much time is spent wandering around corridors – and pretty generic sci-fi corridors to be honest rather than something uniquely TARDISy.

• While we were expecting something mythic, it instead feels a little grungy. At times it’s clearly aiming for an Alien vibe, and there’s more than a little of Danny Boyle’s S unshine in there too. They’re great films to reference (and the episode uses its influences well enough), but you wonder if that’s the right vibe for a story about the TARDIS?

• On the other hand, there are some very effective moments of tension and edgy action scenes.

• Blimey, there are a lot of corridors.

• The monsters look great and they are excellently directed for maximum scare value. There are some pretty strong scenes for “family entertainment” (not that we’re complaining – kids love a good scare).

• We get to see a good few TARDIS rooms and areas, though many of them are just glimpses. The “centre” of the TARDIS is worth waiting for, though, and there’s a striking re-visualisation of another established part of the TARDIS. Oh, and a guest appearance from Avatar ’s Tree Of Souls.

• Lancashire not only gets namechecked a number of times, it actually provides a vital clue.

• Did we mention the corridors?

• The Doctor has an epiphany about Clara.

• Our prediction: Doctor Who forums will be full of people moaning about the resolution.

• There’s a lot of expository dialogue.

• The three guest stars are all uniformly forgettable.

• There’s a great FX shot with the TARDIS looking like a prize in a fairground attraction.

• Something returns, unexpectedly and slightly mystifyingly, as if it”s been skulking in the TARDIS waiting patiently for a moment to be of use again. We suspect this may have larger ramifications, but it’s odd to see the Doctor regard it so casually…

• There’s some really effective use of sound.

• No one trips over a sunlounger (sadly)

Doctor Who “Journey To The Centre Of The TARDIS” airs on BBC One On Saturday 27 April at 6.30pm.