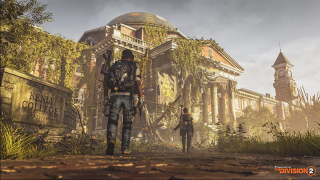 The Division 2 BTSU Datagloves are focused wholly on skills, so if you haven't specced into a skill build, it's not worth rocking these bad boys. If you have though, then the BTSU Datagloves have three worthy talents:

As you can see, skills are the name of the game with the Division 2 Exotic Gloves. It works best with offensive skills, but will still come in handy whether you're rocking the revive hive, explosive seeker mines, or something else entirely.

How to get the Division 2 BTSU Datagloves

While there's only a few reports of people obtaining the Division 2 BTSU Exotic Gloves at this point, the method seems to be the same for everyone: Cross your fingers for a lucky drop at the end of the Camp White Oak mission. Multiple people are claiming they've got the BTSU Datagloves from random Black Tusk enemies while others are saying it has to be the final boss, but either way, you need to play through Camp White Oak to unlock it. It seems to be available on all difficulties, though as is the case with most exotics, the chance of obtaining it will probably be higher if you play on harder difficulties.

Good luck, Agent! The gloves don't seem too difficult to obtain, so just keep running Camp White Oak until you get it.