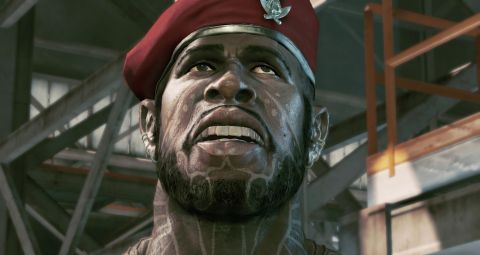 Outdated and clearly troubled, Devil’s Third has escaped development hell only to burn out publicly.

On every level bar one, Devil’s Third is a trainwreck of a game. From a core design perspective, it simply doesn’t work. A successful mix of first-person shooting and third-person melee is far from impossible: Jedi Outcast managed it in 2002. But Devil’s Third has no elegant solution for incoming fire and has cribbed its outmoded gunplay from mid-Noughties cover shooters, making protracted dashes through the crossfire akin to suicide. You will still get to douse your chosen sharp instrument in your enemies’ blood in the few better broken up arenas, however, because their feeble AI isn’t up to self-defence, vacantly standing rooted to the spot as you dash around and bury a kukri in their guts.

Melee breaks down even more often as the game progresses. The thugs never get smarter, so the game resorts to pushing up the enemy count and granting them ever more hilariously lethal weapons. If dicing up men armed with assault rifles was tough, you can forget about surviving a run though RPG fire at an armour-plated, minigun-wielding heavy. Later levels chuck bucketloads of ninja, close combat brutes and men carrying bulletproof riot shields at you in a bid to make bladed weapons relevant again. This fails spectacularly, because onrushing foes are no more immune to being mowed down than you are, and explosives easily deal with those shields.

If only the gunplay were satisfying. Instead, it is woolly, a generous auto aim overcompensating for lacklustre controls, while upping the sensitivity only makes it fussy. The entire arsenal, meanwhile, feels like it was quietly swapped out with BB guns, so insubstantial is the feedback. And since the enemy soldiers have all the self-preservation instinct of a vase of petunias, it’s not like you’ll have to engage your brain tactically – Hell, they’ll stand next to a live grenade and not bat an eyelid until it turns them into a shower of gibs. The one move that feels right is the dash-into-powerslide, but hunkering down is so efficient that I rarely had to use it (it’s cool; I did anyway).

The story that propels all this involves a covert group, the School Of Democracy (SOD) causing satellites to fall out of orbit en masse and triggering global panic, but the globetrotting plot only ever makes fractional sense beyond ‘bad things are happening; stop them’. There's some nonsense with a protegee that's conveniently forgotten halfway through until being picked up at the end, some more idiocy with a serum that makes monsters but also grants superpowers, and a lecture about caring, but it doesn't mean anything: it's all an excuse to shoot men badly.

Devil’s Third is very definitely of a particular era, and so it should be no surprise to learn how fond it is of turret massacres. You’ll be granted emplacements in World War Two-style trenches, an airport, the gunner seat of a prop fighter and more across the campaign. As if it really were 2008 all over again, there’s also a risible driving bit, where you tumble down a snowy mountain in a truck that handles even less gracefully than the Mako from Mass Effect 1. Bar that mid-air battle, all are at least trivial and short-lived.

Presentationally, meanwhile, it’s a hot mess: grainy, low-res textures popping in to fill the backdrops around some fetishistically designed lead characters. There are a few fantastic settings – a Japanese castle town, a cosmodrome – but it’s never long before you’re back in war-torn streets or bland tunnels. And wherever you are, the frame-rate falls off a cliff every few minutes. It’s as if Valhalla placed a Gamecube game and 360 disc together in the teleporter from The Fly and then shoved the resulting mishmash straight into the Wii U’s tray.

It’s telling that boss battles, where more parts are on loan from Ninja Gaiden, are the most memorable bits. The SOD may be made up of poundshop action-figure villains, but at least they’re an endearingly weird collection of freaks. Many make a mockery of ranged weapon damage too, ensuring those light and heavy attacks and your dodge get a workout. But these fights lack Gaiden’s finesse, and also show Devil’s Third’s age terribly: they’re chock full of QTE stick-waggling, telegraphed instakill strikes, tediously long health bars and unblockables.

Multiplayer is a little better still, though it solves none of those base mechanical issues. At least with tiered arenas and opponents capable of traversing them, shootouts are finally more than grinding down a corridor into a battery of guns. Then there’s the incredibly optimistic free-to-play-style currency model. Dollen is your earned-through-play money, and there are also funds for clan upgrades, but premium Golden Eggs are spent on weapon attachments, on stat-boosting clothes, on being converted to ready Dollens and on the powerful ‘X’ weapons you unleash after racking up kills.

The Wii U version (a F2P PC release of the multiplayer component is coming) is not initially stingy with Eggs – you’re granted a carton for starting and another for enduring the campaign – but the fact you can buy advantages still rankles. The game modes themselves include a few charmingly madcap twists, such as lobbing watermelons into a giant smoothie maker, or the clan-based metagame, so there’s a certain low-fi fun to be found here, but there are countless better online shooters in 2015.

Overall, Devil’s Third is crude, then. The one place that seems intentional, the one level it holds together on, is tonally. In its star – laconic, chain-smoking hard-case Ivan – it embodies all the excesses of the ’80s action hero and places them at the centre of a straight-to-video plot. It’s this spirit you can ‘thank’ for the boss fight where you beat up a woman in lingerie, the relentless explosions and the comical geysers of blood that accompany heads flying off, which happens even when you pop a cap into a stomach or leg. Viewer discretion advised, but its tonal objectionability and wanton brinkmanship is not without some rough charm.

Ever the provocateur, Devil’s Third’s creator Tomonobu Itagaki has suggested that you need to play well to enjoy the rest of his game. But right up until the final boss (and his annoying ability to shrug off attacks), it was never deaths that bothered me. It was the lack of connection to the controls, the overripe mechanics and the dull AI. Devil’s Third is not a hateful slog in the way that Yaiba: Ninja Gaiden Z is, but even after – or more likely because of – half a decade and four game engines, it’s shoddy and ill thought out. It captures the strange magnetism that accompanies all still-smouldering disaster sites, but that’s about the best I can say.

Outdated and clearly troubled, Devil’s Third has escaped development hell only to burn out publicly.

I've… seen things you people wouldn't believe… Attack ships on fire off the shoulder of Orion. I watched c-beams glitter in the dark near the Tannhäuser Gate. All those… moments… will be lost in time, like [small cough] tears… in… rain. Time… to die…
See comments