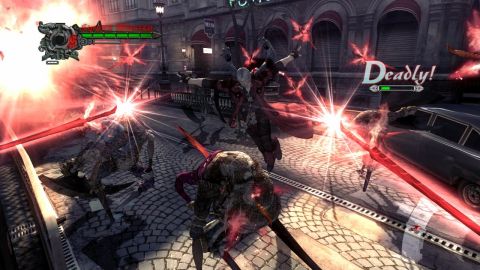 There is a reason we’ve given so much space to this Capcom stunner; something that previously seemed destined to arrive mangled during the trip from console to PC. Amazingly though, Devil May Cry 4 is a slick, PC-enhanced title, not a hastily shoe-horned mess. This means the game looks great, it’s graphically scaleable, you can use a keyboard to play it and, to top it off, it plays like the entire PC development team was briefed with a PowerPoint presentation with the title “Hell Yeah!” while drinking Red Bull and listening to Nine Inch Nails’ ‘The Perfect Drug’. DMC4 is ridiculous, enjoyable and uplifting unlike any other title.

For those new to the series, in the past titles you’ve played as silver-haired smart-arse Dante, the son of the famous goodly demon Sparda who rebelled against his own army to save humanity, but now you control another chap called Nero. The point of these games has always been to chop and slash your way through hordes of monstrosities, interspersed with cutscenes of classic Japanese anime stupidity. The big difference between these games and JRPGs has always been how the DMC series has given us a wink and a nudge to say that they realise how silly they are – and DMC4 takes this up to amorphous out-of-this-world barmy. It takes the greatest pleasure in how over-the-top it can be, and that’s just a part of what makes it such outright fun.

You control the game using either the keyboard (don’t expect to use the mouse for anything but menus) or an Xbox 360 controller, locking onto enemies, slashing them with your sword or blowing them up with your gun – which, of course, has unlimited ammo. Your goal, apart from tearing demons to shreds, is to rack up combos by hitting enemies with as many different moves as possible in a constant string without getting hit. The better you get, the more red orbs and proud souls you receive, which can be traded for new moves and items at certain times during levels. A new introduction is Nero’s Devil Bringer – that’s his big demon arm – which he can use to grab enemies from a distance or pound them with close-range moves.

Eventually, you’ll have to get the hang of not only rolling out of the way of attacks, but grabbing enemies with the Devil Bringer to keep the stream of combo-increasing moves coming. This is tough, but once you do it’s incredibly satisfying, especially when you unlock the PC-only Legendary Dark Knight mode and have to mince your way through gigantic crowds of enemies.

Story-wise, as mentioned before you now predominantly play as Nero. In fact, Dante is introduced as a bad guy when he murders Sanctus, the High Priest of the Order of the Sword – a group of religious demon-hunters of which Nero is a member. After a brief tutorial with the now antagonist, Nero has to pursue Dante across all creation, through the city and its outskirts, killing demons and gigantic, absurd demonic entities. These range from your common-or-garden variety beasties to Devil May Cry’s trademark nutty-as-squirrel-shit bosses, such as the demon fire lord Berial. This boss is amazing – as you leap about, grabbing onto him with your Devil Bringer, he smashes the town apart with his sword, eventually leaving it a smouldering pile of wood.

Aside from boss-bashing and creature-crushing, you’ll find a series of jumping and puzzle sections to stave off any potential repetition. These are
for the most part bearable in the sense that they’re simple, from using the Devil Bringer to jump between gaps, to moving gigantic death Dreidels down hallways. These are nice, inoffensive ways to split up the countless fighting sessions. However, occasionally they are dissonant, getting in between you and what you know is another brilliant boss encounter. The worst, by far, are the two dice games, that depending on your luck can either be quickly completed or take an agonisingly painful amount of time to slog your way through.

These are bearable forays, though, if you consider how enjoyable the rest of the game is. Once you get the hang of the combo system, DMC4 lovingly opens up to let you buy more moves for Nero, ranging from the useful predictability of Air Hike (double-jump) to more obtuse abilities like Enemy Step, that lets you bounce happily across enemy’s heads, which is invaluable when you’re surrounded. Later in the game you get to play as Dante, who has the same four styles he had in DMC3: Trickster, for dodging; Royal Guard, for reverses and blocks; and Gunslinger and Swordmaster for amplifying your weapons. Dante can also use weapons other than his shotgun and handguns, the most awesome being Pandora – a suitcase of ordnance that has different forms depending on your style, and morphs into a gigantic, daft wheel of death when you use Gunslinger.