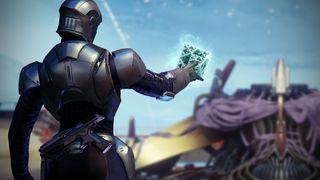 The Destiny 2 Empyrean Foundation event will start on Tuesday, February 4, roughly five weeks before the end of the Season of Dawn. This event will carry us into the next season, which is rumored to be the Season of the Worthy. It's similar to the Final Assault event in the Season of the Undying in that it will catalyze the next season's events - which may see the return of Trials of Osiris - but it's structured more like the Mars Hive-stomping event of Year 2. Here's everything you need to know about Destiny 2's Empyrean Foundation.

What is the Empyrean Foundation?

Again, the Empyrean Foundation is basically the finale for the Season of Dawn. As Bungie explained in a blog post, "Saint-14 will ask all Guardians to contribute to building a beacon that will be a foundation for things to come next Season. The Tower Obelisk will be the focal point of this event, so make sure you have it unlocked and ready to go as it’s going to have some hefty benefits to take advantage of."

In other words, the Empyrean Foundation is a way for all players - not just Season Pass holders - to spend all that Fractaline they've got sitting around. Thanks to the newly activated Tower Obelisk, it's also a way to build up Fractaline relatively quickly outside of the normal sources. This brings us to the heart of the event: farming Fractaline.

How can I farm Polarized Fractaline to donate to the Tower Obelisk?

You can donate Fractaline to the Tower in batches of 100. Donating Fractaline will progress all the Timelost weapon bounties in your inventory by 25%, meaning you can complete multiple bounties instantly for just 400 Fractaline. However, you'll run out of Fractaline mighty quickly if all you do is smash that donate button, and you're going to need a lot for this event.

Ordinarily, you can obtain Polarized Fractaline by completing weekly Obelisk bounties around the solar system, completing Saint-14's daily bounties, achieving seasonal triumphs, and completing playlist activities like the Sundial which benefit from Obelisk boons. These Fractaline sources will all be relevant during the Empyrean Foundation, but there will also be a major new source: the Tower Obelisk.

For the rest of the Season of Dawn, the Tower Obelisk will award bonus Fractaline every week based on its resonance level. You can increase its resonance level by upgrading the other four Obelisks. In other words, you shouldn't donate any Fractaline to the Tower until you've maxed out all of your other Obelisks. This will not only allow you to enjoy all the benefits of those Obelisks for the remainder of the season, it will also dramatically increase your weekly Fractaline payout from the Tower Obelisk.

What do I get for donating Polarized Fractaline?

So apart from setting the stage for the next season, what's the point of all this Fractaline? Well, in addition to rapid Timelost bounty completions, players will receive a few rewards at certain donation milestones.

For starters, everyone who donates 5,000 Fractaline or more will unlock a seasonal triumph and this emblem:

Additionally, Bungie's set seven community-wide Fractaline donation milestones. Only three have been revealed at the time of writing, and judging from them, the final goal will be lofty indeed. If the Destiny 2 community manages to reach the final goal, all players will receive a special shader, regardless of how much they donated individually.

We're going to need a lot of Fractaline to get this done, so if you've been looking for something to spend yours on, look no further.