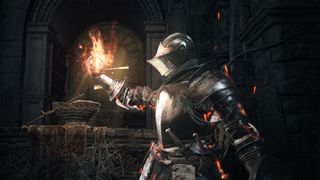 We asked, you voted, and now it's official: Dark Souls 3 is the Ultimate Game of the Year for the 2016 Golden Joystick Awards. That marks two Game of the Year victories in a row for FromSoftware's dark fantasy series, with Dark Souls 2 claiming the same honor in the 2014 awards. Portal 2 won Game of the Year in 2011 when the original Dark Souls was released, but if anything's going to mess up your sweep, it might as well be GlaDOS.

Dark Souls 3 overcame rivals including Fallout 4 (which came out too late for the 2015 awards), Overwatch, and Pokemon Go for the Ultimate Game of the Year category. Our official review from April agreed with the popular sentiment, calling Dark Souls 3 "oblique, punishing and gratifying in a way mainstream console blockbusters seldom dare to be" and assigning it 4 1/2 stars out of five.

It's still not quite clear if or how FromSoftware will continue the series, but this recognition from Golden Joystick voters around the world would be a fine way to say farewell to Lordran.