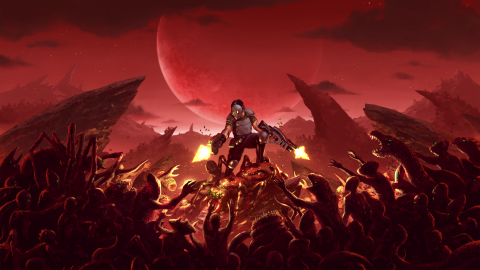 Simple and proud, 10tons' retro shooter offers large-scale murderisation for you and some friends - just don’t expect much of a looker when the bloodlust wears off.

Sometimes all you need is a pair of analog sticks, a rack of weapons and enough cannon fodder to sate even the deepest of virtual blood lusts. That’s the mantra Finnish developer 10tons Entertainment was banking on when it released its monster-eviscerating top-down shooter back in 2003 - but does that hold up in a 2015 re-release?

Twelve years ago, the original PC version of Crimsonland was a blast. The basic premise is this: you start in the middle of a barren map while increasing numbers of zombies, aliens, lizards and spiders attempt to murder you. Weapons drop at random, as do powerups that range from predictable health pickups to nuclear bombs that wipe out most of the map. Kill everything to level up or progress to the next stage. That’s it. Job done.

The basic tenets of that gameplay - shoot, evade, shoot some more - are alive and well in this remaster, but they end up being both a blessing and a curse. The original code was designed for a keyboard and mouse, but the game transitions perfectly to the twitchy controls of a twin-stick shooter. The 360 degree axis of your plucky, death dealing marine is perfect on pad and that extra sense of control makes all the difference when Crimsonland’s action starts to get hectic.

And things will get hectic, fast. Enemies pour in from every corner, while later waves and missions have dens that spawn the blighters endlessly if you don’t plug them for good. As a single-player experience, you’d soon get overrun as the screen filled with waves of enemies - but with the addition of four-player local co-op, Crimsonland transforms into a perfect fit for couch play. It’s incredibly easy to lose track of your top-down hero amid all the chaos, but the addition of other human players adds a new layer of tactics as you draw hordes of enemies away from friends or important power-ups.

Yet that simplicity often bites Crimsonland in the backside - it really is as simple as it sounds, meaning repetition sets in quickly once you’ve spent a few hours in its blood-drenched company, an issue made all the worse by some truly ugly visuals. Booting up the original shows how brutal time can be on an indie game’s presentation but playing the remaster doesn’t offer much better. Ugly textures and enough browns to put a ‘70s home stylist into a euphoria-induced coma simply aren’t good enough for a game that dares to call itself ‘HD’.

It’s a small mercy then that you’ll be so busy blowing stuff to chunks you probably won’t notice its pug-ugly mug. The basic set of survival modes have now been shuffled around, with a new campaign called Quest added for some bonus longevity - locking weapons and perks behind a grid of increasingly tough missions. There’s no story and it’s pretty forgettable on its own, but the slog through its 70 missions is worth it for those rewards.

All those perks and weapons feed straight back into the best part of Crimsonland - Survival mode. While the remaster includes multiple twists on the basic “don’t die” ideal (with an extra one just for XO), they all pale in comparison to the returning big daddy. Those game-changing perks are unlocked after each wave, and when added to the new four-player setup and twin-stick controls Crimsonland becomes all kinds of crazy.

So ugly, yes, but incredibly addictive nonetheless. It loses its lustre rather quickly if you’re playing solo, but grab a few friends and Crimsonland becomes a couch play charnel house thanks to that oh-so-moreish Survival mode.

Simple and proud, 10tons' retro shooter offers large-scale murderisation for you and some friends - just don’t expect much of a looker when the bloodlust wears off.

Dom Reseigh-Lincoln
Dom has been playing games longer than he'd like to admit, but that hasn't stopped him amassing a small ego's worth of knowledge on all things Tekken, Yakuza and Assassin's Creed.
See comments
Gaming deals, prizes and latest news