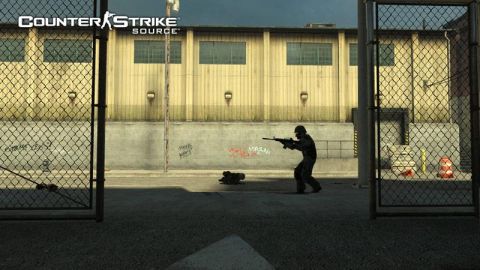 Key to this success is the visual makeover. Most maps feel like genuine places thanks to extensive re-texturing, subtle visual effects and the careful littering of debris and extraneous objects about the place. By far and away the most successful reworking is cs_office, the snowy agency that's been a staple of the game since year dot. Stage a firefight in the back rooms by the (freakishly tall) captives and watch as stray bullets clip PCs, shattering their cases to reveal the internal chips. Fire a single round into the safety glass windows and they'll shatter, but not collapse. Watch then, as one of your team-mates leaps through the glass, leaving a terrorist-shaped hole. Remarkable.

Then, there's the subtle change in dynamics. Flash-bangs are striking in their effectiveness - get caught in their blast radius and you'll not only be blinded, but a strange after-image is burnt into your retina: you'll find yourself shooting at visual artefacts, rather than the dangerous chap with the pointy gun and angry grimace. Skilful players will notice that shadows can now be used to aid ambushes: hide in a dark corner and wait for your opponents to give themselves away. The physics may seem pointless to begin with, but we're starting to see players improvise in the heat of the moment, using barrels as temporary cover or to hide the flashing bomb, using grenades to blow rifles back into the hands of an unarmed terrorist... there will be more.

And yet, we have criticisms. All the levels in this first release are taken from the very latest version of vanilla CS, and the choices are a little confusing. Maps like de_piranesi (blow up/protect a medieval castle come museum of antiquities) and cs_havana (a hostage rescue effort set in a South-American slum) just aren't that interesting, with too few choke points and confusing crisscross patterns. The latter example in particular goes out of its way to frustrate you, by randomly rotating which doors are opened and closed at the start of a round; forcing both sides into picking their path through almost unfamiliar territory. Will you turn a corner to face a brick wall and almost certain death? Probably.

Yet in three months, that might not be an issue. The wider community is desperately seeking some way of creating for the Source engine. We have no reason to doubt that map-makers will be churning out re-makes of classics, alongside novel ideas and layouts.

There's a reason why CS became the most played mod on the planet: it's because it's brilliant. It's comfort gaming, something you can slip into for an evening. Just one more map, just one more round, one more-headshot, one more life. It seems so simple, little more than kill or be killed, but the human dynamic changes everything. Dodging the best sniper on the map, rushing the nearest bomb-site, crushing the opposition... these are all stories we create in our hours of play. Yet it just got better. This update has refreshed our love of the game, bringing a new physicality and violence to online shooters. CS:Source is essential.

Counter-Strike Source is available now for PC via Steam