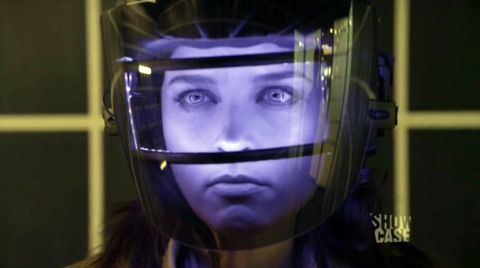 THE ONE WHERE Kiera investigates a VFX company and their VR game technology allows Liber8 to take control of her CMR chip so she can do their bidding. Bad Kiera!

VERDICT While the basis of this episode is a nice idea, it doesn't quite work. Perhaps it's because there's something inherently unbelievable in mind-control gadgets working in our time – hell, they even seem to be brand new in the future, and don't even work properly there. It's also a big leap to assume Carlos and the rest of the police force could accept Kiera being mind-controlled by a computer game; wouldn't this make newspaper headlines around the world? Instead he simply hands her a couple of headache pills and moves on. Yeah, right.

Still, it's great seeing Kiera and Carlos having a fight (which she wins!) and Rachel Nichols's impressive blank-face while under mind-control proves she'd make a pretty decent Terminator.

Kellog gets to meet Carlos in this episode, too, which is interesting. The cop assumes he works for Kiera's mysterious Section Six and Kellog plays along, looking very uncomfortable. When Kellog saves Carlos's life at the end of the episode it opens all sorts of possibilities. Will he ever find out that Kellog is part of Liber8? Will he arrest him? Will he feel he owes him and let him go? Oooh, juicy.

Other moments of note include Kiera being baffled by the concept of paintball (you're not alone there, love) and Alec performing a hilarious “Who da man?” dance after turning off Kiera's chip and thus saving her life. It's also nice to see him leave his barn of computers to reboot her in person, although there's something kind of creepy in seeing her with wires coming out of her like some kind of robot...

DEATH BY TRAIN There's something horribly chilling about the sequence in which a mind-controlled woman pulls a man in front of a train. First you see her feet right next to the edge of the platform and then she just y anks him. Really creepy.

THE FUTURE IS EVIL The mind-control experiment we see at the start of the episode goes wrong, and yet the nasty people watching the demonstration still clap and cheer! Boo, hiss! It's also a nice bit of continuity to see the subject of the experiment is now-deceased Liber8 member Stefan.

KNOCK, KNOCK You realise quite early on in the episode that company boss Nettinger is a bit of a prick because he fake-knocks on his employees' cubicles when he walks in on them. As anyone who's worked in an office knows, only the prick-bosses do that. (If there's no door there, why are you knocking? Sheesh.)

COOL TECH For once this episode's cool tech isn't something from the future – it's the VR world Betty and Kiera get to test out. They don swanky helmets and find themselves in an icy wilderness under attack from soldiers. It's so real Betty says she can even feel the cold. Which reminds us, yay for Betty getting to leave the police station!

Also, is the VR room on the show a little nod towards a TNG holodeck? They don't use its walls to generate the game – the helmets do that – so why the familiar grid-like pattern?

WTF? While reviewing these episodes I always scribble the first thought that comes into my mind in my notebook for perusal later. After this one, I read back my notes and found “Kiera needs rebooting physically. Fnar.” I have no memory of writing that. Mind control could be real...

IS IT JUST US, OR… Does throwing a “Y” into a company name automatically make it more sinister? We have Tendyne Systems in this episode, clearly a play on Terminator's Cyberdyne.

BEST LINE
Kiera: “I thought you called because you wanted to return something you stole.”
Kellog: “Your heart?”