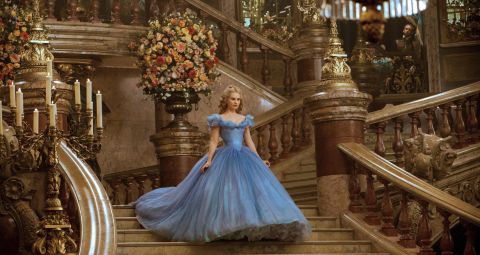 Loving and lavish, Kenneth Branagh’s take will please traditionalists more than revisionists, but there’s enough here to enchant both young and old.

How I met your stepmother...

From Hamlet to Jack Ryan, Kenneth Branagh has never been afraid to re-interpret iconic characters as a director. He takes on another biggie with this live-action version of the classic Charles Perrault fairytale Cinderella – albeit in a very play-it-safe fashion. Don’t expect another Maleficent; we’re not about to see events from the point-of-view of the wicked stepmother. No, this spin on the rags-to-riches story is about as adventurous as a cheese sandwich.

Still, Branagh does takes a big risk in the opening. Once upon a time, we would’ve joined Ella (played by Downton Abbey’s Lily James) with just her father (Ben Chaplin). But here, after a brief interlude of happiness when both parents are alive, Ella’s mother (Hayley Atwell) passes away – sob! Then comes father’s new wife, Lady Tremaine (Cate Blanchett) and her two (not-so-ugly) daughters, Anastasia (Holliday Grainger) and Drizella (Sophie McShera), and before you know it, father’s died too. That’s a lot to take in if you’re five.

Gradually ostracised and turned into a skivvy, Ella becomes ‘Cinderella’, a cruel nickname due to her sooty appearance, while bitterness swells inside Lady Tremaine – twice-widowed and now desperate for her own daughters to marry well. From here on, you’ll know the story – the Prince (Game Of Thrones’ Richard Madden), the Royal ball and so on.

Even so, screenwriter Chris Weitz (yes, he of American Pie) channels a warped literalism into events. Take the scene where Helena Bonham Carter’s delightfully dippy fairy godmother turns the pumpkin into a golden carriage and mice into horses (one still has rodent ears, when the transformation doesn’t quite work). At midnight, as Cinders races to get home, Weitz takes the idea to its logical conclusion: what would it be like to be inside a moving carriage changing back into a pumpkin? The result is brilliantly conceived and executed.

With triple Oscar-winners Sandy Powell and Dante Ferretti providing, respectively, costumes and production design, Branagh’s vision is pure luxury – as if Harrods had swapped retail for film production. In particular, the ballroom sequence is staggering, with Cinderella’s blue gown eye-popping as if it were shot in 3D.

Credit must go to Lily James, who never lets the visuals sink her performance just as she stands tall against an imperious Blanchett. There are times, particularly when the bland Madden is on screen, that the wholesomeness gets a bit much. But kids will likely have a ball.

Loving and lavish, Kenneth Branagh’s take will please traditionalists more than revisionists, but there’s enough here to enchant both young and old.