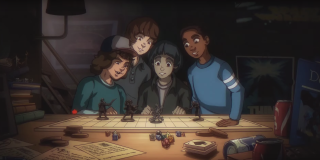 It's always interesting to imagine one of your favorite shows as an animation. Game of Thrones could have been far crazier with more magic and crazy world building as a cartoon and Stranger Things could showoff the wild side of the upside down if it were an anime.

That's exactly what the folks at humouring the fates, a 2D animation studio, thought about Netflix's prime show. They put their own anime version of Stranger Things together in a short trailer to celebrate the launch of Stranger Things season 3. You can check it out right here:

The trailer pulls together most characters from the first and second seasons of the 80s-inspired show. We see Eleven and Mike, alongside the rest of the Dungeons and Dragons crew. We even see an undead Barb, a fan-favorite death from the first season, walking among a group of characters. What a world, right?

Stranger Things third season kicked off on July 4 with all of Hawkins in tow. Mike, Dustin, Will, Lucas, and their mother, Steve Harrington are all ready to take on the next disaster that strikes their little town. Check it out on Netflix and come back here to check out any Easter eggs you may have missed.

Looking for some of the deals on a new game or piece of hardware? Check out the best Amazon Prime Day game deals.