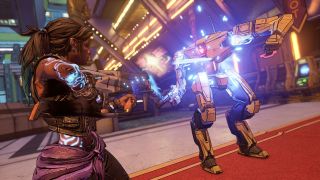 Borderlands 3 hit the ground running in September, and it hasn't slowed down since. True to its word, Gearbox has exemplified the rarely proven advantages of a live-service experience, rolling out update after update to its looter shooter in a committed effort to make Borderlands 3 better than ever.

Everything, from feedback-focused hotfixes to comprehensive content drops, has given Vault Hunters more than enough to enjoy over the last three months, but today sees the release of Borderlands 3's first piece of paid story DLC; Moxxi's Heist of the Handsome Jackpot.

To celebrate the launch, and the end of the year itself, we spoke to Gearbox about the journey ahead for Borderlands 3 as it looks to 2020, which will also see the launch of two next-gen consoles with both the PS5 and Xbox Series X. Our full Q&A with Gearbox senior project producer Anthony Nicholson can be read below, covering everything from the return of Handsome Jack to a potential Borderlands 3 Nintendo Switch port.

The future of mayhem

Where did the idea to infiltrate Handsome Jack's casino come from for this first piece of story DLC?

Anthony Nicholson: All of us got in the room and started thinking about what would be the next cool thing that we'd like to see in a DLC world, and we had some thoughts about going out into space and doing a heist story. Some of the guys that were pitching had come up with this setting of a giant, Hyperion-themed space yacht, and we thought that would be really cool.

The way that we were writing the narrative for Borderlands 3, there wasn't really a way for Hyperion to fit into it, given that Handsome Jack is dead, so we just kind of left that to the side. Now we can go out there and see what's going on in the world he's left behind.

There is, to be honest, a little hesitation whenever we're thinking about stuff like that, because Handsome Jack is such an iconic villain, and we don't want that to overshadow or make it feel like this is something that we need to have in Borderlands. But I'm really pleased with the way that we approached it, and we think that people will really enjoy going back to fight the Hyperion loaders and interacting with Jack in a different way.

How much will future DLCs address some of the cliffhangers left by the campaign, or are those the kind of questions you want to answer with a sequel?

Nicholson: DLCs are meant to be accessible for as many players as possible, so if you haven't completed the main game, you can still go off and play this story once you've left Pandora. To be able to do that, we don't really want to continue the story from the main game, so DLC is more of a spin-off story where we can do more crazy things, push the envelope a little bit, and try to build on the foundation of the main game.

Player feedback has already proven invaluable for informing post-launch gameplay, but has the response to Borderlands 3's campaign been able to shape your approach to storytelling in upcoming DLC too?

Nicholson: Yeah, for sure. We have a meeting every week for a couple of hours with the different designers, creative leads, producers, and everyone associated with maintaining the game after launch, and we listen to everything that the community has to say. It's difficult during development, because you just don't know. We can anticipate all day about what people might like, because we know what has made Borderlands successful before, but it's not until the game actually comes out that we hear what the actual verdict is and how people feel.

Luckily for us, the game has been very well received, and we're very proud of it. But everything that everyone has been talking about has been taken into consideration and helps us to kind of move forward and shape the different things that go on into DLC, and allow us to expand on some of the things that they love.

How informative has it been to track user data since release? Have you been surprised by any particular insights around Vault Hunter meta or player behaviour?

Nicholson: I'm a data guy, so all of that stuff is really interesting to me! But being able to see how often people play, how long they play for, where they spend their time, how many times a boss has been defeated, what Vault Hunters are played the most, and which guns are used the most... All of that stuff is extremely helpful as a guide for, let's say, the type of weapons we might create in the future, or the types of adjustments that we make to a boss fight. So that's been really awesome.

The Steam release of Borderlands 3 is still on the way, but has there been such consideration for ports to other platforms beyond this, such as VR or Nintendo Switch?

Nicholson: Whenever we're working on the game as big as Borderlands, we have to have that type of stuff in our mind, but typically, those types of things are driven by the publisher. So whenever there's business for it, or whenever there's an interest from the fans, and 2K comes out and says, 'Hey, we're thinking about this type of thing', then that's usually when we start to assess it and go down that path – like with Stadia, for example. We don't have any current plans for VR or Switch at the moment, but given how what we've done in the past with past Borderlands games, it's obviously not out of the question. It's just not something that's on the cards right now.

2020 will also see the launch of both PS5 and Xbox Series X. Have you considered plans for Borderlands 3 to utilise next-gen tech with a re-release of any sort?

Nicholson: Oh, sure. Anytime that any new hardware comes out, we're always interested in pushing the boundaries and seeing what we can do. We're the game that has billions of guns. Will next-gen tech allow us to have trillions of guns? We'll find out. But different things like that make it really exciting for us to see what we can do with current franchises, future IP that we haven't even thought of yet, and things of that nature. So we don't have any idea of what Borderlands 3 means for the new consoles that have just been announced, but if 2K has business for it or we hear anything, then I'm sure it would be an option.

Finally, outside of DLC and gameplay content, are there any ongoing under the hood issues with regard to Vault Hunter meta or loot pools that you want to specifically target in 2020?

Nicholson: We spent the first 90-days really getting the game into something that reflected immediate fan feedback, because it's all about them. Fans are the reason why we made the game, and we want them to play and enjoy the game. We make a lot of DLC content and we give away tonnes and tonnes of free content, just because we're we're fans of the game too – we want people to have fun.

So all the adjustments that we've made thus far, we're kind of responding to that. And we have a few things that we want to do in the coming year to beef up and make the Vault Hunters more fun. But we'll talk more about that in 2020.