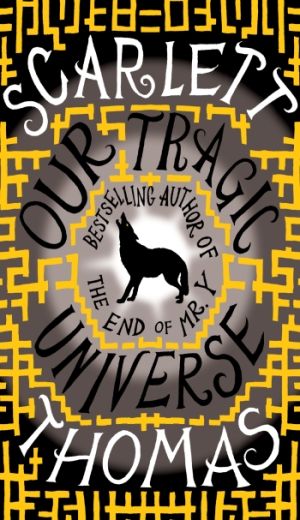 Socks, some drugs, but no rock and roll

Supposing someone wrote a novel that was just like life. There’d be long passages of domestic trivia, a certain amount of observation, reflections on failure and obsession, the occasional lightning flash of inexplicable felicity, some really weird bits you simply can’t understand. Mostly, though, stuff would just happen. There’d be no story, just a meaningless sequence of events, because lives aren’t written, they’re lived.

The life of Meg Carpenter, heroine of Scarlett Thomas’s Our Tragic Universe , is horribly plausible. She’s a writer who churns out sci-fi potboilers instead of getting on with her life’s-work novel. She’s stuck in a dead-end relationship. She thinks she may be in love with an older married man, but can’t bring herself to do anything about it. She walks the dog and knits socks. Mostly she lives vicariously through a bunch of equally inadequate friends. Even the occasional spurts of weirdness appear to be random and meaningless. A strange man she met as a child, who might just have had magic powers, prophesied that she’d probably never amount to anything. Many years later, the magician’s ship-in-a-bottle washes up at her feet on the beach. A weird book that might just possibly explain the meaning of the universe sort-of forces itself upon her, and by some strange coincidence its author is coming to give a talk in the insignificant provincial town where she lives. There are unconfirmed sightings of what might just possibly be a monstrous supernatural beast, which she might just conceivably possibly be unwittingly responsible for. Nothing comes of any of this stuff, of course. They’re almost certainly just false leads, random chance, coincidence. In the end, practically nothing happens. Just like life.

Read a few pages and you’ll be convinced that Our Tragic Universe is a huge, breathtakingly ambitious experiment, carried out by one of the finest minds of her generation. What it’s all in aid of, however, is not entirely clear. Every structural and narrative device Thomas uses seems to promise a forthcoming dazzling plot twist or a huge idea on the point of being made narrative flesh. It’s as though someone had built an apparatus twice as big and three times as ingeniously complicated (and dangerous) as the Large Hadron Collider in order to find out the optimum time for boiling an egg - something we can all relate to, entirely relevant to the lives of millions of people, but hardly, um, rocket science. Travelling hopefully is all very well, but without at least the promise of a destination, it’s just running on the spot.

If you approach it strictly on that understanding, it’s a fun ride. Thomas writes superbly well, with a wonderful ear for dialogue, an artist’s eye for telling detail and the observational powers of a disillusioned anthropologist. The book’s intricate structure is a masterpiece of engineering, even though the purpose the mechanism serves is only to tantalise and frustrate. There are also any number of free gifts nestling in among the narrative cornflakes; quotes and excerpts from a galaxy of unwitting guest-stars from Chekhov to Lin Yutang, Nietzsche to Aristophanes, the main function of which would appear to be to show us thickos what a clever girl Ms Thomas is, but which undeniably add to the gaiety of nations.

Thomas is either a genius or so far up herself she’s practically sticking out of her own ear, or both, and her book is both impossible not to admire and strangely hard to like. If it’s an experiment, there’s no electric shock, no cheese, and the white mouse is the reader. Tom Holt