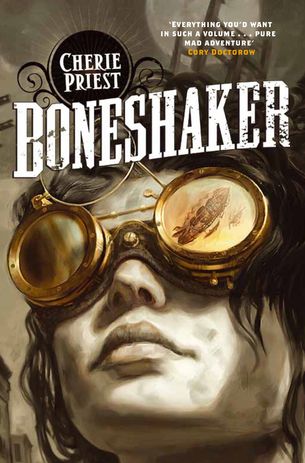 Genres rise and fall, and right now steampunk is having a moment, so it’s unsurprising that publishers are dusting off their American back catalogues. What is surprising is that it’s taken Boneshaker three years to get a British release, as it’s very good (it was nominated for a Hugo Award in 2010), and features another element that’s currently popular: zombies!

There’s a refreshing lack of “cool” to this book: no parade of glamorous outfits, gadgets akin to 21st century ones or luxurious settings. The heroine, widow Briar Wilkes, is 35 years old and looks it, and dresses in shabby men’s clothing because she has a dirty, dispiriting and low-paid job - definitely not your usual cleavage-heaving corseted moppet. Wilkes’s late husband was an inventor who, in using his radical new mining machine, the Boneshaker, to tunnel into bank vaults, unleashed a toxic gas on Seattle. Now what remains of the city is walled in, to prevent the “Blight” and the undead “rotters” it turned many of the city’s inhabitants into, from escaping.

Gadgets and gizmos are scattered sparsely through the narrative. While airships cross the skies of a disunited America – the Civil War is still being waged in the East – there’s little technology in the world in general. Often novels billed as “steampunk” feel like bog-standard urban fantasies overlaid with cute Victorian equivalents of modern technology: the clockwork mobile phone, the steam-powered carriage with robot horses, the steam-driven (yet somehow compact) Babbage engine. Priest’s approach means that the setting for Boneshaker feels like a genuine alternate America, not just a modern location in 19th-century drag.

Most of the technological devices are within the walled-off city – necessity really is the mother of invention, so there are air pumps bringing clean, Blight-free air down to the tunnels below the streets, and city-dwellers have various bits of armour, advanced weapons and even in one case a mechanical arm to help themselves survive. These are not mass-produced items gadgets - in many cases they are unique to the user. Briar only comes across these strange contraptions when she crosses into the ruins in search of her teenage son, Zeke, who’s gone in to try and find out the truth about his father and clear his name.

The rotters, the Blight, and the people desperate enough to try to make a living within Seattle are all obstacles to both Zeke and Briar’s quests. The zombies aren’t the main focus of the action and Priest doesn’t overload the story with gore, although there is a reasonable amount. In many ways, the Seattle-set parts of the story have more in common with post-apocalyptic dramas like The Walking Dead or even Mad Max than Morlock Nights or The Difference Engine . Everything is decaying, very little is secure. The theme of a parent searching for a missing child is a well-worn one, and in some books it’s used mainly as a pretext to send the hero off to bust heads, but Briar and Zeke are well-written enough to make it believable here.

The ending won’t come as much of a surprise, but perhaps that’s testament to Priest’s writing: she’s created rounded characters whose actions you come to anticipate, and the story has pointed at a certain conclusion. It does leave a few questions remaining (not least what’s going to happen if the Blight keeps seeping out of the ground) but the ending of Rowan and Zeke’s tale is satisfyingly complete. Priest has confidence in her story, and hasn’t felt the need to leave clumsy, obvious cliffhangers to lure you into reading the sequel. Boneshaker is good enough that you’ll look up the next book in the series ( Dreadnought , out in the UK in December) anyway.

Read our review of another steampunk novel - Lilith Saintcrow's The Iron Wyrm Affair .
Read more of our book reviews .