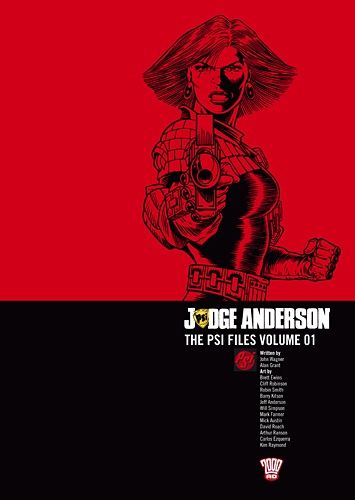 My favourite 2000AD character has always been Cassandra Anderson. Introduced as a supporting character in the original Judge Death story, Anderson is a Justice Department psychic who, due to her abilities, is both a lot more relaxed than Dredd and a lot less formal. The version you saw in the movie (And if you didn’t see the movie, you really should), is a younger, more studious take on the character and it works very well, but, for me, Cassandra Anderson will always be the Justice Department’s best, most troubled, slightly rock’n’roll psychic troubleshooter. This telephone directory-sized digest collects her first appearances as a lead character and there are some absolute classics in here.

“Four Dark Judges”, the first story here, sees the return of Judge Death in an elaborate scheme which, unlike several later ones, still makes sense and still makes the Dark Judges a very credible threat. This is Anderson at her youngest, experienced but out of her comfort zone and easily manipulated by the spirits of the Dark Judges. It’s almost a road map for each subsequent story; Cass is informal, relaxed and has a different perspective to her colleagues. Initially it gets her in trouble but ultimately proves essential to the City’s future. It’s tightly paced and action heavy and ends on a couple of nice character beats that elegantly set the character up for the future.

“The Possessed”, the second story here, builds on that with Anderson dispatched to retrieve a small boy who has been possessed by a demon. As the investigation traces back to the dimension the demon came from, Anderson jumps in head first and is soon in serious trouble. Her struggle to survive in turn leads to the sort of horrific ethical decision Dredd would steamroll through and Anderson is haunted by. Superficially a trival story, it has a dark heart that will stay with you for a long time after reading.

“Leviathan’s Farewell” isn’t strictly a Judge Anderson story. She’s in it, reading a letter from her friend, Empath Judge Corey, but it’s really focused on Corey and her experience with the last whale left alive. A short, carefully-designed piece, it’s beautiful, poignant and will utterly break your heart. There’s a strong case for saying this is in the top ten best stories 2000AD ever printed. There’s as strong a case for saying it’s the best single issue story they ever printed and this book is hugely enriched by its presence.

“Hour Of The Wolf” and “Triad” are also reprinted here, introducing and exploring the character of the East-Meg psychic assassin Orlok. Very much the Moriarty to Anderson’s Holmes, especially if there were unresolved sexual tension between the two, Orlok was introduced in the Block Mania plot but really comes into his own as a member of Anderson’s supporting cast. A very real, and brutal threat, in both stories, he’s arguably a better recurrent villain than even the Dark Judges.

The last major storyline here, “Engram”, brings things full circle with an apparently innocuous investigation leading Anderson to horrific truths about her childhood and what that means for her work with the Justice Department. It’s a long, careful story that builds menace for almost its entire run before we find out the dark secret at the heart of Anderson’s mind and the tragic past she’s survived. It’s far from emotionally easy to read but it’s easily one of the best stories in here and combined with the others already mentioned, makes this an essential purchase.

Cassandra Anderson is the human face of the Justice Department, and very nearly all her finest moments are collected here. An incredibly varied, rich collection of stories, all with real heart and genuine emotion, this is one of the strongest 2000AD collections released to date. If you’re a fan, you need this and if you’re coming to the world fresh, there are few better introductions. This is classic 2000AD and it deserves a place on your shelf.