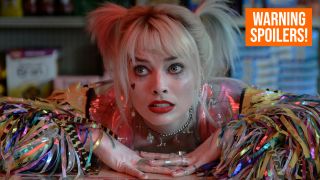 The Birds of Prey ending actually leaves things surprisingly open. As such, we have plenty of questions to scratch our chins over. What are the future fates of the eponymous Birds of Prey – including Harley Quinn, Cassandra Cain, and Huntress?

With Margot Robbie set to return as Mistah J’s former lover in James Gunn’s The Suicide Squad, now is the perfect moment to look beyond the Birds of Prey ending and theorise as to what could be next for Gotham’s kookiest criminal gang and its bubblegum-chewing ringleader.

But first... Major spoilers for Birds of Prey follow! Turn back if you have not seen DC's latest movie.

First: A quick refresher on the Birds of Prey ending. After planning to sell the sticky-fingered Cassandra Cain to Roman Sionis (aka Black Mask) in exchange for her life, Harley Quinn enters an abandoned attraction on Amusement Mile. There, she attempts to get the diamond everyone’s after out of Cassandra, who swallowed it earlier in the movie. The plan involves prune juice. I’ll say no more.

Unfortunately for Harley, Renee Montoya has tracked her down, as has Roman’s right-hand man, Victor Zsasz, along with Black Canary. Montoya gets kicked out of a window and Zsasz drugs Harley, though his attempts to cut open Cassandra to retrieve the diamond is thwarted by an arriving Huntress, who kills Zsasz.

Now that the Birds of Prey have formed, they fight their way out of the theme park, but not before Cassandra is kidnapped by Roman and his men. Montoya gets shot but is saved by her bulletproof corset. She gives Harley her gun, but warns her it only has one bullet left in the chamber. Harley – on rollerskates, naturally – goes after Roman and causes his vehicle to crash by Gotham’s docks.

After a tense stand-off, Harley misses her shot at Roman. The crime boss, who is holding Cassandra hostage, goads Harley, but Cassandra reveals that she took a grenade from Harley and pulls the pin while placing it in Roman’s jacket. Harley kicks him off the pier and he explodes.

Shortly after Black Mask’s death, Montoya, Huntress, and Black Canary are shown teaming up as the masked Birds of Prey, a new crime-fighting team. Harley, meanwhile, finds Bruce the hyena (thought to have died in the explosion at Doc’s) and takes on Cassandra as her protégé. She also pawns the diamond to start her own company. The three then speed off in Harley’s car as the credits roll.

What are the new Birds of Prey up to next?

Did you think the actual “Birds of Prey” would include Harley? Think again. The group we see at the end of the movie – Montoya, Huntress, and Black Canary – is fairly close to its comic book counterparts, though it seems they’ll be a force for good on the streets of Gotham moving forward.

Of course, we might still get a sequel – Margot Robbie outlined her hopes for a continuation of the group during an interview with our sister magazine SFX – so anything that comes after the one sequence showing off the vigilante group at their genesis will probably deal with that. A Birds of Prey return could also mean new members: Oracle, Blackhawk, and Hawkgirl are among those who could bolster the girls’ ranks in future.

Will Harley, Cassandra, and Bruce be in The Suicide Squad?

It’s unlikely we’ll actually see a continuation of whatever hijinks Harley and Cassandra will get up to with their new business, at least not in 2021’s The Suicide Squad. Margot Robbie is confirmed to lead an all-star cast, which includes everyone from Peter Capaldi to John Cena, but Cassandra Cain actress Ella Jay Basco is not among them. Don’t rule out a Bruce the hyena cameo, though, especially if he proves to be a hit with fans. And who doesn’t love a hyena munching on Twizzlers?

What was Harley going to tell us about Batman?

Ah, the Birds of Prey post-credits scene. “Scene” is overstating it a bit, mind. After the credits, you’re treated to a brief voice clip of Harley saying that “Batman is f—” before being cut off.

What does she say? That depends on how filthy you want to go. Harley has already shown she has a thing for “that hunky Wayne guy” and, while she might not recognise the chiselled chin of the Dark Knight, it’s not beyond the realms of possibility that she has the hots for him. A safer prediction is Harley throwing in an f-bomb or two. She probably hasn’t forgiven him for Suicide Squad. Then again, who has?

We couldn’t get through this without talking about the hole in all things: the Clown Prince of Crime who is conspicuously absent from Birds of Prey. The only mentions Joker gets are in reference to he and Harley splitting up, outside of a quick Suicide Squad Ace Chemicals flashback.

It’s probably best not to read too much into Joker’s absence – other than DC may choose to go in another direction to Jared Leto’s portrayal and didn’t want to muddy the waters by either having him or a new actor show up. Besides, this is Harley’s big break – she deserves to stand out on her own without the jester of genocide overshadowing her.

Where are the Suicide Squad?

This is a Suicide Squad spin-off, after all, so it’s a question worth asking. Much of the team ended up back at Belle Reve prison at the end of the 2016 movie, with only Harley broken out by the Joker. In all likelihood, Deadshot, Killer Croc, et al are probably stewing away in their cells until whatever sequence of events in 2021’s quasi-reboot The Suicide Squad brings them back together.

Who will replace Black Mask?

Probably one of the biggest surprises in Birds of Prey is the decision to kill off the fantastically camp Roman Sionis, played by Ewan McGregor. While his arms and legs have been scattered across Gotham harbour, there’s still the small matter of his role in the underworld now being very much up for grabs.

Who could fill that mask? It’s probably something a potential Birds of Prey 2 will have to deal with – so let’s spitball some possible names.

If we’re sticking with the street-level mob boss route, Carmine Falcone (who will also appear in The Batman played by John Turturro) is a good a choice as any. His connections and no-bullshit approach is the perfect foil for Harley and the Birds of Prey.

But if they want a more physical threat, you could do worse than re-introducing Bane, though he may be a little too familiar for Batman fans.

Whoever takes up the mantle in any potential sequel, though, should be a step up from Black Mask. Sure, he was menacing, with just the right amount of comic book-style campiness, but he was dispatched with a little too easily in the end. Bring in one of Batman’s big hitters from his rogues’ gallery and then we’re talking.

For more on Birds of Prey, listen to the Total Film team discuss the movie on the latest episode of the podcast.