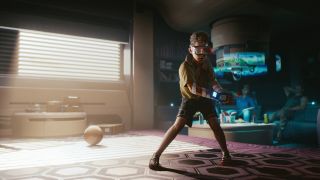 With all the recent news about PS5 and Xbox Project Scarlett filling our brains ahead of June's big E3 gaming show, we can't help filling our wish journals with the things we actually want our new machines to do. It's not just about prettier graphics (though we'll never say no) and magic cloud streaming features - it's about getting the perfect in-game selfies, customizing our machines to match our weird personalities, and, um, sex?

Most of the time when you play a game something phenomenal happens, and before it's even over you know deep within your bones that you have to show everyone what you just experienced. It could be a killer combat sequence, or a scene that made you laugh out loud, or even a glitch that's too bizarre to keep to yourself. So what the next generation of consoles could really benefit from - PS5 especially - is more varied editing options for your video and photo capture. Some games have filters you can apply to any photo mode screenshots you take, but when it comes to sharing captures and video clips directly from PS4 to Twitter (or your social media of choice), the Share Factory app is clumsy and fiddly to use. Even some options to add fades at the end of each clip, or zoom-in and slow-mo, would be really helpful to emphasize certain bits of capture and would mean that more people would - hopefully - be encouraged to share their favorite moments from the game online. Photo captures could do with some basic cropping/zooming options too, and perhaps even some Instagram-like filters. Not that we should start adding dog face filters to photo mode, though...because no-one needs to see that.  Zoe Delahunty-Light

My request for the next generation doesn't relate to its internal features per se, but - for once - I'd love to see a new console that launches with an extensive, diverse, and readily available lineup of games that aren't just technical showcases for the hardware itself. I have miserable memories of scouring the PlayStation Store every week in the first few months of the PS4's life cycle, searching desperately for something, anything to play that could help me feel better about investing into the console at such an early stage. And I'm not just talking about the big-budget exclusives that will almost definitely be bundled with the PS5 and Xbox Project Scarlet respectively. Now that they're up against the likes of Google Stadia and its streaming service, Microsoft and Sony need to make a strong introduction with a launch day library of indies, mid-tier, and triple-A titles, and the quality needs to match that quantity, too. Otherwise, I regret to think I'll be experiencing buyer's remorse all over again. Alex Avard

A commitment to cross-play

Once Fortnite finally got cross-play working across every system, the concept of being cordoned off from playing with friends just because you have a different box under your TV was rendered instantly archaic. Medieval, even - a relic from the Dark Ages when we thought illnesses were caused by fell spirits and that PlayStation, Xbox, and Nintendo players could never possibly link up because networks. Now it's incontrovertibly clear that letting us all play together like the perfect little children of the world that we are is not a matter of means, but of will. That's why the feature I most want to see in the next generation of consoles is a day-one, full commitment from everybody (I'm looking at you, Sony) to make cross-platform multiplayer happen wherever and whenever possible. Connor Sheridan

We've all been there: you settle down in the evening to play a game with what little free time you have, only to be greeted by the need for a 1.9GB update that completely torpedoes your night of would-be fun. My number one request from the next generation of consoles isn't necessarily about the hardware itself - it's focusing on the infrastructure needed to ensure that downloads and installs don't take an eternity, even when you're on lightning-fast internet or your console's hard drive has plenty of room. Too often, I've silently seethed at my PS4 and Xbox One for taking ages to install games and 'copy' update data (whatever that means) that I could be playing on PC in a heartbeat. If the PS5 could just get rid of the file copying step altogether, the amount of time it'd save would probably end the existence of gaming backlogs. Lucas Sullivan

As consoles drift ever closer to PC architecture, I'd love to see them at least partially integrate the expanded graphics settings of PC games. I'm not asking for dozens of options and sliders with multiple settings apiece. I just want the option to increase my FOV, disable motion blur and other bugbear effects, or optimize for frame rate over visual quality. That might sound like a pipe dream - and it is, partly - but we've already seen some current-gen console games delve into this a bit, with a precious few letting players prioritize frame rate. I'd love to see that option, in particular, available in more console games. A higher frame rate doesn't necessarily lead to sexier, system-selling screenshots, but it makes games look and play better, plain and simple. Consistently hitting 60 FPS - which should be the standard for next-gen games - would be way more appealing to me than all the pixel density and 4K+ resolutions in the world. Austin Wood

This is a bit blue sky/a very long shot, but I would love to see the next generation of consoles be more modular or have more open architecture (that would, perhaps, be compatible with the current batch of the best peripherals, like the best Xbox One accessories). It would be great if we didn't hit the midpoint of the next console cycle and have to drop another $300-$600 on a half-step hardware iteration. Building an architecture that would accommodate upgrades means Sony and Microsoft could actually keep pace (to some extent) with PC hardware without having to rely on total console refreshes, and would also encourage developers to add more settings to the console ports of their games, so players could choose on their own to prioritize frame rate versus visual fidelity or otherwise customize visual settings. Also, an occasional, a less expensive bump in power would be a lot more palatable than having to reinvest in an entirely new console. Alternately, one word - teledildonics. Alan Bradley

Seriously. You know how rad it was to print out my own black and red flame decals instead of buying a new limited run, pre-skinned console every three to four months? Before the Xbox One and PS4, I had a disposable income. Now? The instant Sony announces a special Dragon Quest edition PS4 Pro, you already know I'm reaching for my wallet and maxing out my fourth credit card. My life is a mess now, and the only thing these next-gen console makers have to do in order to fix it is let me print my own Slime-emblazoned faceplate design, slide it into a weird plastic shell, and remove the entire front slab of my console just so everyone can know how much I adore every major video game as it comes out. If that's not possible, I'll throw a tantrum for five whole minutes and probably wind up buying a PS5 and Xbox Two anyway. Gabe Carey

Let me ask you this: why hasn’t there been a PlayStation or Xbox that gives us what we ACTUALLY want? Cup holders, for instance. Compliments on your outfit choice for the day. A WALL-E-style personality so I have company with which to fill a yawning void of loneliness in my soul. You know, that sort of thing. The small stuff. However, I think the feature I’d like to see most would be a menu narrated exclusively by Morgan Freeman. Or Stephen Fry. Or Cate Blanchett. I’m not fussy; any of the above would do. They’d then take the time to tell me where everything is or congratulate me on my skill each time a Trophy/Achievement 'dings' into life on the screen. Perhaps Michael Fassbender would weigh in too on a particularly good kill-streak with his now infamous "perfection" line from X-Men: First Class. I just want to be loved, dammit. Benjamin Abbott

Tempting as it is to throw in some nonsense, I’m going to have to go personal and serious (sorry, not sorry). I’m quite heavily ‘invested’ in console gaming, and particularly PlayStation, so to speak. I have…’different’ hands, which means I have constantly had to adapt my interaction with, and manipulation of, controllers since childhood; having to learn not only how they work but how I can work them. However, it was, and remains, the PlayStation controllers that provided me with the best and most enjoyable way to play. By a long shot. So, a little selfishly, the feature I want from the next-gen, and kind of need, is a balance of both advancement and retention of the core design principles in Sony’s controllers. If they can stay true to the design philosophy and build quality of their pads, enhancing that excellent, core design - though not at the cost of development and evolution, of course - it'll be a blessing. A primary means not only for me, but for millions, will continue to be successful, remaining important and relevant, whatever peoples' preferences or platform. Whatever the final product is, it will likely please the masses, but if they do nail the above, then my hands and I will be incredibly pleased. Rob Dwiar

Did we get it all wrong? Is there something you need from the next-generation? Let us know on Twitter.