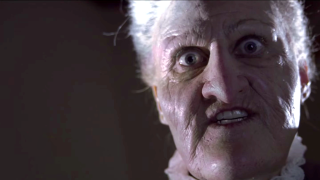 Much like amuse-bouche and micro pigs, sometimes the most potent things come in small packages. It’s the same with horror. The longer the movie, the more chance there is to ruin the sense of unease with laboured explanation and rubbery shots of the monster. Everything on this list, by contrast, is compact and essential like an Oompa-Loompa butler. An evil one.

You can watch all of these in an afternoon and suffer the nightmarish consequences for the rest of your life, and yes, that was meant to sound more like a recommendation than it did. So, with that chilling, probably-confusing thought in mind, it's time to turn off the lights, pop on your headphones, set these horrors to fullscreen and ease yourself into this oily bathtub of nope.

Horror is often a friend to the downtrodden. Slasher films pick off the bullies and the jocks first, leaving the socially awkward to survive and thrive. The Birch takes this theme and twists it, providing a just, satisfying ending that still gives the lingering sense an awful bargain has been struck. It also does an incredible job of establishing a twisted, unusual mythology in less than five minutes. Kiss romantic strolls in the forest goodbye.

David F. Sandberg’s Lights Out is the perfect horror short. It has a simple, chilling central conceit and a monster you see just long enough to fear. By linking the creature to our primal fear of the dark, it’s a concept everyone can understand. If you’ve looked down a dark corridor before going to bed and wondered if there’s something unseen lurked in the gloom, you can relate to Lights Out. It’s since been made into a full-length feature film, which is still worth a watch, but the short is an elegant, economic exploration of what scares us.

This one works so well because it channels that distant fear of being scared as a child. It has the warm familiarity of a Disney film - director Rodrigo Blaas worked on numerous Pixar titles, including WALL-E, Up, and Finding Nemo - but soon gets savagely dark. The overall effect resembles a Grimm brothers fairy tale or ancient, cautionary fable: good children having nothing to worry about. But bad children - even the ones who don’t realise they’re doing anything wrong - will suffer forever.

Another simple, brilliant concept from David F. Sandberg, which cleverly plays with the concept of seeing awful things through a lens. It’s a stark, quiet, and isolated, and it never needs to explain anything. You’ll understand what’s happening immediately, but it’ll still make you jump. Promise.

There’s already something unpleasant about abandoned things submerged in filthy water; the tangled embrace of a rusted shopping trolley, the fleshy caress of something far worse. One Last Dive gleefully plays with those anxieties. If you were ever mad enough to go swimming at night - and honestly, all the algae and abandoned tyres make it less sexy than movies would have you believe - then this will put you off forever.

The Smiling Man is based on this creepypasta story, which you should read before you watch it (honestly, read it - it’s really short and absolutely worth it). It doesn’t quite reach the uneasy depths of the original, but it’s deeply disturbing nevertheless.

One thing that’s especially lovely about sharing a bed with another human being is knowing that if (when?) you jerk awake in dead of night, filled with nameless dread, you can always roll over to your significant other for comfort. Watch this, then kiss that reassuring thought goodbye forever.

This is a lean, quietly harrowing watch, coming in at exactly one minute including credits. It’s everything a horror short should be, with enough ambiguity to keep you thinking about what it all means long after you’ve watched it - usually in the small hours of the night, as you wonder what’s making that scratching noise under your bed…

Guillermo del Toro loved this three-minute short so much he ended up producing a feature-length film based on it, and watching it you can see why (not least because he explains why in the intro...) Like many things on this list, it’s a simple thing done horribly well; Mama toys with that unspoken terror of being afraid of the people who should love you most. Brrrr.

This one is part parlour game, part nightmarish vision of hell - imagine playing Statues with an actual demon, and you’re somewhere close. The reality is 14 minutes of nerve-shredding unpleasantness, with some wonderfully schlocky SFX.

Thanks? If you’re after horror that’s more thoughtful and less jumpy, He Took His Skin Off For Me is worth a look. You can guess what it’s about from the name, but the stark, sticky reality of it all makes it a difficult watch. It’s a practical SFX masterpiece - none of it was done using CGI - so old-school fans from the Rob Bottin school of horror should devour this whole.

It’s not quite right to call this one ‘pleasantly chilling’, but it does have an enticing, fairytale-like quality that recalls distant memories of childhood Halloweens and Tim Burton at his sinister best. Brilliant stuff from the Bloody Cuts Horror anthology.

Another one from Drew Daywalt, whose entire YouTube channel is a trick-or-treat bag of festering malevolence (I mean that as a complement, obviously). Even John Carpenter’s Halloween can’t compete with this for hiding-in-cupboard horror.