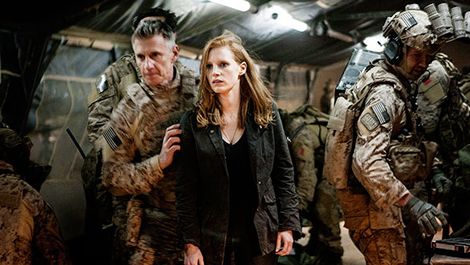 Towards the end of Zero Dark Thirty , Kathryn Bigelow’s riveting dramatisation of the 10-year manhunt for Osama bin Laden, the soldiers of Seal Team Six board a couple of stealth choppers for a secret mission across the Afghanistan border.

As the birds hug the contours of the arid rocky landscape, the commandos banter, josh and listen to music.

If you were to close your eyes for a moment, you could almost believe you were watching Predator .

Only there is no camouflaged alien awaiting this unit – just the world’s most wanted terrorist, securely holed up in a fortified compound, a stone’s throw away from a Pakistani military academy.

Still, it highlights the knife’s edge on which Bigelow’s follow-up to the Oscar-winning The Hurt Locker balances.

Too far one way, and you’re in the world of gung-ho Hollywood fiction; fall the other, and you’ve entered the realm of dry documentary.

With a story encompassing so many years, characters and continents, Mark Boal’s script could have easily become a tiresome chronicle of factoids, statistics and bullet points.

Its masterstroke is to make the pursuit of bin Laden deeply, intensely personal – a dance to the death choreographed by one driven individual. The fact she is female is very significant.

As Boal has pointed out, Jessica Chastain’s Maya – an opinionated, liberated western woman – may well have represented everything bin Laden loathed about the ‘Great Satan’ he plotted against.

Yes, the squadron that took him out in the early hours of 2 May 2011 – led here by Joel Edgerton ( Animal Kingdom ) – was very much an all-guy affair.

But it was Maya’s real-life equivalent who told them where to go, something that, when coupled with Bigelow’s presence behind the lens, can’t help but give the movie a course correction away from the traditionally male-dominated universe of tradecraft, espionage and counterintelligence.

It takes a while to get to that painstakingly realised endgame, however.

The film begins with a chilling aural collage made up of genuine 9/11 recordings. (“Is this the real world or an exercise?” says one unidentified speaker.)

Yet the action kicks off two years later at a CIA ‘black site’ where an al-Qaeda suspect is shown being interrogated and waterboarded by Jason Clarke’s industrious, diligent Dan. (“In the end, bro, everybody breaks,” he tells Reda Kateb’s weeping captive. “It’s biology.”)

This is Maya’s introduction to the dirty reality Boal presents as a cold, hard truth: that the ‘heroes’ in this tale are responsible for systematic, relentless torture.

Lest Zero Dark Thirty be accused of 24 -style revelling in the minutiae of coercion, though, Bigelow stresses there is a cost to be paid on both sides.

Clarke, the agency’s blunt instrument, eventually burns out. Chastain, in contrast, stays fixed on a task that incrementally robs her of her humanity, compassion and, yes, femininity, a transformation superbly conveyed by an actress whose sculpted features become ever more rigid as the plot unfolds. (“A lot of my friends have died for this,” she reveals in a rare moment of introspection. “I believe I was spared to finish the job.”)

Finding the ultimate needle in a haystack takes legwork, research and good, old-fashioned bribery. It takes sacrifice too, one calamitous deception in 2009 bringing home what it took to give Obama his priceless tactical victory.

“We are failing!” yells a toupee wearing Mark Strong to his Langley underlings after that disaster. “Bring me people to kill!”

Yet when Chastain does bring her superiors the ultimate target after skilfully identifying his most valued courier, the DC hierarchy – represented by Stephen Dillane, James Gandolfini and another perhaps too familiar face – delays, prevaricates and shilly-shallies to the point where you genuinely fear the biggest fish of all will wriggle off the hook.

What’s a sign of a good movie? One that keeps you gripped even when you already know the outcome. And ZDT is never more vice-like than when recreating Operation Neptune Spear, the raid on Abbottabad that ended with bin Laden on a slab.

A tour de force of editing, camerawork, production design and FX, this stand-out sequence has the urgency of real combat and the visceral immediacy of a first-person shooter.

Yet there’s no fist-punching at the end of this long, dusty road. Instead we are left, like Maya, with a simple, bewildering question: where to from here?