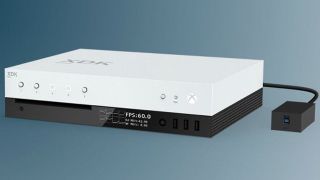 Xbox vice pres Mike Ybarra has reiterated that developers don't need to worry about parity between Xbox One and Scorpio.

In less technical talk that means you don't have to worry about super-future Scorpio games being held back by Xbox One development. The confirmation came after this tweet from Ybarra was contested:

@XboxQwik But there is a fps parity betwen Xbox One and Scorpio in multiplayer. Which means a 2013 console is holding a 2017 console back.May 19, 2017

The messaging from Xbox that you'll be able to play the same game on Xbox One, One S, PC and Scorpio seems to have confused some that it would be 'the same game.' Hence the idea in that tweet that Scorpio would somehow be constrained by running Xbox One games (although I'm not sure where the idea of a frame rate parity came from). Here's Ybarra's response:

How that pans out remains to be seen. If a game is developed specifically to max out the Scorpio, how will that translate to Xbox One? The theory from way back when Microsoft first announced the console is that it would be a lot like PC settings - sliders moving about depending on the hardware. But with different chips and tech it might not be quite as easy as that. If a studio does decide to go in hard on Scorpio might we see other teams coming in for porting duties?

We'll likely find out loads more at E3 in June, and if not I'll ask. In the meantime here's everything we know about Xbox Scorpio, and if you want to start a good argument here's a comparison of the Xbox Scorpion and PS4 Pro.