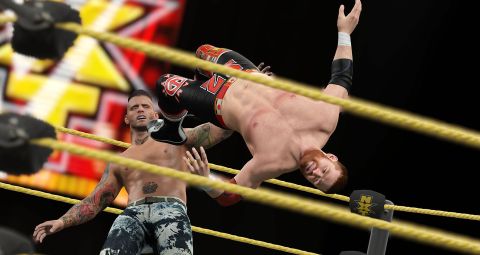 The key to a long career in professional wrestling is to make less go further. 'Stone Cold' Steve Austin, as an example, counteracted career-threatening knee and neck injuries by transitioning from a technician to a wild brawler, while 'Nature Boy' Ric Flair went the other way. A podgy power-wrestler at the time he suffered a broken back in a 1975 plane crash, Flair slimmed down and adopted a cowardly villain persona, and extended his career by 22 years and 16 world titles.

So the news that WWE 2K15 arrives on Xbox One and PlayStation 4 in severely pared-down form didn't necessarily have to be bad news. We're talking about a series that has been building haphazardly on blocks laid during the PlayStation 2 era, so this offered a golden opportunity to hit the reset button and reinvent the game on new hardware. Unfortunately, that chance has not been taken.

First up, the game doesn't look that impressive. A select few grapplers, such as John Cena and Randy Orton, have had their character models beefed up considerably and look great in stills, but the supporting cast have had a few extra textures slapped on their faces with all the grace of a mud pack. The difference in fidelity is jarring.

Meanwhile, the Divas' locks of hairs still seem to be perpetually on the edge of clipping into their internal organs at a moment's notice. Come into WWE 2K15 after playing pretty much any other new-gen game and you'll be left monumentally unimpressed. I know, gameplay over graphics and all that, but let's not pretend that a touch of visual magic wouldn't have glossed over some of the package's sins.

Note that I say Cena et al look good in stills. In motion, the jerky, stiff animations stall WWE 2K15's new-gen aspirations – it uses the same awkward gameplay mechanics as it always has, meaning that while many features and match types are absent in the move to the new consoles, all the legacy problems are already unpacked and making themselves at home. Movement is still clunky and slow, punches and kicks still don't feel like they have any weight, and timing reversals still feels like it's as much luck as judgement.

When it's on form of course, there's definitely something to be said for Yukes' fighting system. More performance art than a true competitive bout, the WWE 2K games' matches do an excellent job of mimmicking the unpredictable to and fro of the real thing, with ever-narrowing reversal windows allowing for Cena-style megacomebacks, while still rewarding dominant performances. But it's a very particular way of depicting professional wrestling, and was beginning to feel old hat five years ago. For whatever reason, the series seems unable or unwilling to reinvent itself.

And like in all game series that refuse to evolve, the annual changes and tweaks end up folding back on themselves, in much the same way the FIFA games are locked in a permanent balancing tussle between defence and attack. WWE 2K15's new gameplay twists are nostalgia acts from a decade ago. The return of the stamina meter is the biggest change; wrestlers now visually tire as the effects of the match wear on, causing them to hobble gingerly up ladders, or struggle to drape themselves over their opponent after hitting a finisher.

The meter's presence slows the pace of bouts, to the game's benefit; you'll find yourself attempting to conserve your energy during the opening stages of the contest, preventing matches from degenerating into slugfests straight from the bell. It serves its purpose of refreshing the combat from the last few iterations, making for a more tactical offering that serves up the occasional piece of visual drama, as beaten-down grapplers agonisingly crawl to the ropes or try to scoop themselves off the mat to make the pin.

A somewhat less welcome return is that of the quick-time event. In an attempt to mimic the catch-as-catch-can nature of chain wrestling, collar and elbow lock-ups now begin with a rock-paper-scissors game to determine who begins the chain in control. Subsequent reversals are dictated by a 'lockpicking' mechanic where both players seek out a sweet spot by twiddling the right analogue stick. It fulfils its core objective of keeping the opening exchanges cordial and low key before the big money moves are decanted, but it doesn't excite or delight; it just is.

Familiar visuals and familiar action, but an unfamiliar lack of ways to play with them. Of all the cuts, the diminished roster is actually the least of the game’s problems. While the lack of retro grapplers hurts (and it's more than a little mean-spirited to make Sting a pre-order exclusive), the contemporary roster has its priorities straight. This year's hot acts, such as Ambrose, Rollins, Wyatt, Rusev and Cesaro, all make the cut. Is it worth getting upset over the absence of irritating fools like Zack Ryder?

Perhaps it isn't, but it doesn't help WWE 2K15's cause that the cuts also slice deep into the customisation suite. The TV-aping WWE Universe mode returns, but you can no longer create finishers, or a custom arena, or even a female wrestler, and with only 25 Create-a-Wrestler slots available, it all points towards a year of disappointment and frustration for WWE 2K's active and creative community. But even if you could fiddle around with the length of each and every one of your CAW's nosehairs, MyCareer – the main single-player attraction – is destined to disappoint. The premise allows you to oversee your custom wrestler's rise from NXT obscurity to WrestleMania main event, but it's bogged down by uninspiring storylines and too many meaningless 'filler' matches. Much like the current WWE product, one could quip.

Outside of WWE Universe, the only other single-player mode of note is 2K Showcase, which dips into the WWE video library to - yes! - showcase two great rivalries from the promotion’s history - in this case Shawn Michaels vs. Triple-H from 2002-2004, and CM Punk vs. John Cena from 2011-2013. Yukes has always done this sort of thing really well, but including just two in this year's package is uncharacteristically stingy. More are promised, but it's telling that the microtransaction store front finds its home in the 2K Showcase tab.

WWE 2K15 gives the overall impression of an unfinished game, and one that represents poor value for money when compared to the riches of content in previous entries. But it's what is included that worries me. When 2K Sports wrestled control of the WWE rights in 2011, the hope was that a new outlook could rehydrate a series that had been allowed to dry out. But if WWE 2K15 is any indication of the licence's future direction, this is a series that's content to keep spinning its wheels. Reinvention is what propelled Austin and Flair to the top of the card; the WWE 2K series is slowly slipping its way down to curtain-jerker status.