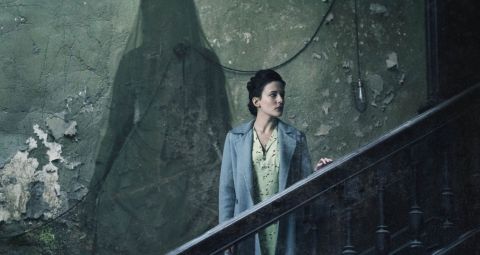 YOU WILL MEET A TALL DARK STRANGER

Despite being 12A, James Watkins’ smash-hit Hammer horror The Woman In Black turned the fear factor up to 11, becoming the BBFC’s most complained-about film of 2012. Based on Susan Hill’s 1983 novella, and a successful stage adap, it was canny “boo!” cinema that didn’t linger long. This handsome follow-up is, 15 certificate notwithstanding, more sedate and much less scary.

Jon Croker’s script, from a story by Hill, uses a clever conceit. It’s WW2, some 30 years after the original, and country piles such as Eel Marsh House are being used by evacuees - in this case teacher Liz Parkin (Phoebe Fox), headmistress Mrs Hogg (Helen McCrory) and their class, fleeing London. George Steel’s cinematography impresses throughout.

Clearly no expense has been spared – the house and misty marshes remain eerily beautiful – but it’s more than just set dressing: death is everywhere. Both Parkin and dashing pilot Harry (Jeremy Irvine) pine for those passed, while little Edward (Oaklee Pendergast) lost his parents – and his voice – during an air raid. “We all do what we can,” says Dr Rhodes (Adrian Rawlins), leaving the class on Eel Marsh island in the gloom of a wartime blackout.

There are some clumsy moments, but more problematic is the diminishing number of scares. With her pallid face and banshee shriek, the eponymous spook was everywhere in Watkins’ film. Here, The Woman is such a spectral presence that sometimes it feels as if this is the original, and the earlier film an OTT sequel refusing to play by the same rules.

But if the filmmakers can’t match Watkins’ efforts, at least they don’t disgrace them, deserving credit for fashioning genuine drama from a thrice-told tale.