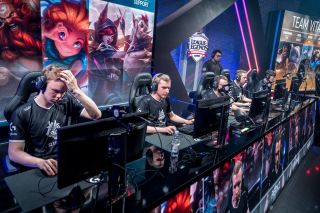 With more and more mainstream media covering the world of video games these days, you've no doubt heard at least heard the phrase. But, if you're wondering exactly what is esports, we've got your back.

In essence, esports is the collective term used to describe competitive gaming at a professional level, with the top esports players often being the very best in the world at their respective game. Competitive gaming isn't a new concept by any means, but the idea of having professional video game players who make a living through competing akin to traditional sports certainly is, at least in the western world. If you're a complete beginner when it comes to the world of esports, we're here to help and answer the question: What is esports?

In conjunction with this piece, make sure you check out all of the top esports games in 2020.

Put simply, esports is competitive level gaming. It's teams of people playing games against each other at a professional level, regularly winning huge sums of money as prizes. These esports players are contracted to play for a variety of different organisations, much like a football or basketball player would be. These teams practice and compete on their respective game just as a footballer or other sportsperson would too. Depending on the game they play – from shooters such as Counter-Strike: Global Offensive esports and Call of Duty esports to the multitude of other genres like sports titles and battle royale games – there will be a number of tournaments and events each year with hundreds of thousands of dollars in prizes up for grabs, sometimes even entering the millions.

Each competing esports organisation will often have a number of teams in their ranks across multiple games. One example is Fnatic; founded in 2004, at the time of writing they have teams on 10 different games including Fortnite esports, League of Legends esports, and PUBG Mobile esports. Other examples of top organisations include G2 esports, Team SoloMid, Team Liquid, and so many more.

How does a game become an esport?

Any multiplayer game can become an esport, although almost all of the biggest games right now such as Dota 2 esports and Overwatch esports simply set out, first and foremost, to be entertaining to play. A competitive scene evolves over time, thanks to both game developer and community support.

There are two elements that play crucial roles in helping a game to succeed as an esport; enjoyability and balance. The first is simple because if a game isn't fun to play, then it's not going to be enjoyable to watch and players will lose interest quickly. On the other hand, balance is key because otherwise the game becomes uninteresting. For example, if one gun was outright better than all of the others in Counter-Strike, nobody would use anything else and each match would be incredibly repetitive. One example of an almost-perfect experience with regards to balance is Rocket League esports. Everyone is on an identical playing field aside from the car, which has a negligible effect on gameplay anyway - it results in a high skill ceiling and the concept is accessible for newcomers, since it's simply football with flying cars.

How to start watching esports

There's no catch-all solution to tune in to esports events, but the overwhelming majority will be streamed on Twitch. To find the specific events taking place, the website Esports Calendar is a handy resource that lists most events happening for the bigger games in the esports industry. Pretty much every single esports event will be streamed live, whether it's the biggest annual competition or a regional qualifier for a league.

Most streams can be accessed via the "watch" button on the right-hand side of each listed event, but the calendar only has the top games. For other titles, simply google the game name followed by "esports", and you'll be led to the right place. Some major games not covered by Esports Calendar include fighting games like Street Fighter esports and Tekken esports, along with Apex Legends esports, PUBG esports, Rocket League esports, Rainbow Six Siege esports, and FIFA 20 esports.

How to start competing in esports

Most games will have ranked modes and playlists you can jump into via the game itself. You'll be matchmade with others online and often – but not always – this mode will have slightly different rules than the standard game, with some restrictions or timer differences. Largely though, it'll be the game you're familiar with.

If you've reached the stage where you're frequently winning in ranked play, there's a good chance you're ready to make the step up. This is where each game varies, because games that have first-party esports support from the developer themselves will have an easy method to compete, like Fortnite's in-game tournament system.

Other titles such as Call of Duty and Rocket League will rely on third-party platforms like Gamebattles, ESL, or FACEIT to provide esports services. All three work in similar ways, by providing leagues and tournaments for players to compete in. There are some nuances in how each one operates, but the gist of it is you can link your online ID, whether it's PSN, Xbox Live, or one of the many PC services. From there, you can register for leagues and search for a competitive match. Don't worry about feeling like it's a big commitment; free-to-enter leagues will usually work on a "play when you want" basis, rather than having scheduled match-ups. There's often cash rewards on offer and if your end goal is to compete at LAN events in person, you need to prove yourself in these online matches first.

From there, once you've either proven yourself as a solo player or got a team together, you'll be able to play in open qualifiers – which will have scheduled match times and are more organised – to see if you can make it as a full-blown pro. Usually, these will also be online, but again, every game is different and sometimes there'll be local events like Call of Duty's City Circuit which allows anyone to represent the various franchised teams. It can't be stressed enough however that the specifics for each game will be different, so make sure you do your research. If you're skilled enough and perform when it matters, there's a chance you'll be signed to an organisation, at which point the sky's the limit!