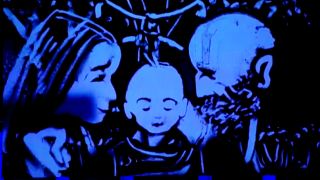 The God of War footage at the PlayStation E3 2017 press conference didn't do much to fill in the years-long gap between the apocalyptic ending of God of War 3 and this new story; how did Kratos go from Greek god slayer to Nordic single father? Would you believe Sony delivered some answers via a live sand art demonstration?

The inaugural session of the E3 Coliseum, a stage show which will host panel discussions with game creators all throughout E3, began with "The Lost Pages: Prologue - A Saga Borne of Ash". Artist Joe Castillo (who you may have seen on America's Got Talent) took the stage to draw a series of illustrations using just a pile of sand and his hands. You should watch the actual performance if you can - it's remarkable to watch the skill and judiciousness Castillo uses to bring these different pictures out of a pile of sand - but here are the pictures themselves.

It began with a book with a few pages torn out of the middle. Symbolic!

Then we see Kratos and his unnamed lover standing in a forest, happily holding baby Atreus.

Next there's Kratos doing… something. Is he marking his wrists? That's where the Blades of Chaos (and later Blades of Athena) used to be attached. Maybe he's symbolically severing that connection to the Greek pantheon.

Atreus' mother hands him a bundle of arrows, in front of a rune-inscribed gate. This could be where the boy gets those lightning powers we see him use to help Kratos in battle.

The sad look on Atreus' face, Kratos kneeling by his side, the flames in the distance… this looks like a funeral to me. I think they're saying goodbye to Atreus' mother.

Father and son stand together, embarking or disembarking their boat, facing a foreboding mountain peak in the distance. The God of War video Sony showed off at its E3 conference picks up from here.