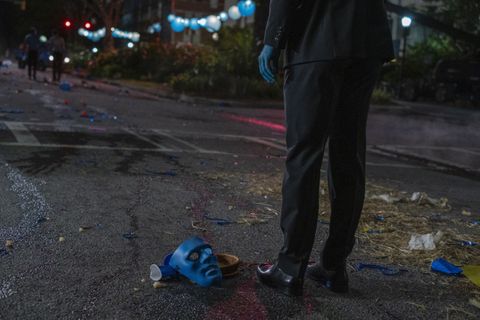 Manhattan gets his moment to shine (and glow) in an episode that finally fills us in on all the answers we've been craving, but some story beats may be a little hard to stomach for comic diehards

Doctor Manhattan is in the house. And in a bar. And an English manor. This is the episode fans of the Watchman comics have been waiting for. Doctor Manhattan has returned, and the curtain has finally been drawn back on many of the show’s biggest mysteries, including where Adrian Veidt is and what the blue-hued demigod has been doing all this time.

Episode 8 may be a divisive chapter for certain purists due to how much it meddles with previously untouchable comic book lore. Yet, it’s a crucial, often touching instalment in a series that is rapidly gaining the confidence to stand toe-to-toe with Alan Moore and Dave Gibbons’ iconic original works. It might even, dare I say it, be time to start asking whether this is better than the comics.

“A God Walks Into Abar” starts with, you guessed it, a god walking into a bar. Doctor Manhattan, wearing a mask of himself circa 2009, sits down opposite Regina King's Angela and offers her a drink. We quickly learn how the pair became partners; why Manhattan takes on the identity of Cal; how Will Reeves finds out about Judd Crawford; and even what Manhattan has been doing since the '80s. The jumble of scenes are illuminating and a great deal to take in, especially when you consider how the show has skimped on answers for most of its run.

Manhattan experiencing before, after, and the present simultaneously allows the episode to play around with narrative structure – something it has rightly been averse to doing so far. Mixing up timelines can often be the crutch of a lazy writer, but here it paradoxically fills in more blanks than anyone could have expected. There is a gnawing feeling, though, that Manhattan’s hazed perception of time has already been executed to perfection in the comics; anything after feels like doodling on the Mona Lisa, no matter how brilliant it is.

Later, we have our first comic book reunion. Manhattan and Veidt meet for the first time in nearly a quarter-of-a-century. When the idea of a Watchmen sequel was floated around, a possible showdown between the pair would have been the top of many wishlists. Thankfully, the scene doesn’t disappoint, mainly thanks to Jeremy Irons’ version of Veidt being a defeated, hopeless man who is frustrated by the human race’s continuous desire to harness nuclear power. When Manhattan offers him the chance to live on Europa, where the god has created life, the former superhero excitedly embraces his new future.

One moment in particular, where tears begin to well in Veidt’s eyes as he realises his life’s work was practically for naught, ranks as one of the series’ best. It speaks volumes of Irons’ ability as a performer that his entire body of surrealist work so far has been topped by one quick glance. It’s becoming somewhat one-note to relentlessly praise this show every week but, yet again, the direction, dialogue, pacing, and plot are all excellent throughout. There are so many career-best performances on display that it feels almost unfair that they have to share the screen with one another instead of getting their own spotlight.

There is one major sticking point: Manhattan’s enforced memory loss. The concept of Manhattan forgetting everything and living undercover as Cal works just about (though a little deus ex machina-like). However, Veidt’s reference to it being “plan A” rankles. For a man who famously pulled off the greatest plan the world has ever seen half an hour before he meticulously explained it, the very idea that Veidt now retroactively had to scramble for another way to stop Manhattan on that fateful day retroactively sullies the shock of that initial reveal.

Another throwaway line – that he presumed Manhattan wouldn’t do anything to stop him bringing about the deaths of three million people due to his lack of morals – achieves the same effect. It’s a nice twist to see Veidt not in control of everything, but it tinkers with Moore’s motivations a little too much, something the show has done well to avoid so far. It’s not a deal-breaker by any means, but those who see Watchmen as sacrosanct may be left frustrated.

The ending (which you’d presume blew half of the show's budget) is as cathartic as you’d expect, with Manhattan going to town on the Seventh Kavalry, exploded heads and all. The scene marks the end of Manhattan's triumphant return and allows Yahya Abdul-Mateen II to finally shine in what was previously (and understandably) a reserved role. This was the blue icing on the cake.

The added dimension of Manhattan being captured – even if warned us, and Angela, it was inevitable in the very first scene – is a killer twist to take into next week’s finale. Laurie is held captive, Angela is on her own for the first time in a decade, and both Looking Glass and Trieu are yet to make their final plays. “A God Walks Into A Bar” wisely got all the answers out of the way (plus a post-credits reveal that Veidt could be joining the fray too) so that next week’s finale is left tantalisingly unknowable. Everyone’s played their hand, or just about to. What comes next? Only Manhattan knows.

Manhattan gets his moment to shine (and glow) in an episode that finally fills us in on all the answers we've been craving, but some story beats may be a little hard to stomach for comic diehards