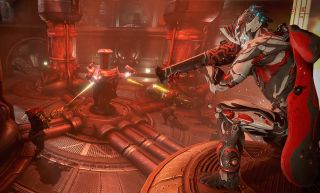 On the surface, Warframe is an incredibly easy sell: play as a ridiculously powerful cyberninja (known as Tenno in the game’s lexicon) and assassinate your way across the galaxy, harvesting loot, hoarding cash, and growing ever more deadly with every kill. And the best part? It’s free to play and available on PlayStation 4, Xbox One, and PC.

If you haven’t been so enticed by that elevator pitch that you’ve closed this tab and are already playing Warframe, let me elaborate. You may be wondering, for instance, why if Warframe is such a great package it’s not universally acclaimed? Why isn’t everyone you know playing (and raving about) it?

Why is now the best time to play Warframe?

Warframe wasn’t always the sleek time-devouring machine it is now. It launched with significant bumps (as, in fairness, do most online games) but more importantly vanilla Warframe felt a bit feature-light. Content felt very sectioned off and discrete, progression was pretty hamstrung, and there wasn’t much of a community in which to find other players to jump in with or to answer your questions about some of the game’s more obscure systems.

But that was 2013. Fast-forward to the present and Warframe is a completely different animal. The bones are the same, but almost every system of the game has been markedly improved or evolved. Gameplay is more connected now, so it doesn’t feel like every mission is a stand-alone affair, though the game has retained enough bite-sized content that if you want to just dive in for ten or fifteen minutes that’s perfectly viable. And that core gameplay, the shooting and slicing and leaping that continues to be the best part of Warframe’s layered offerings, feels sleeker than ever. It’s power fantasy done right, allowing players to feel powerful and dangerous without making the game’s challenges feel trivial.

Does Warframe still cater for beginners?

Warframe is also better than ever at serving different tiers of players. A lot of games of its ilk, particularly MMOs, age poorly. As they get longer in the tooth, the barrier to entry gets higher and higher. New players jumping in are overwhelmed by systems and events and currencies they have no context for, and often tutorials that were designed around the game’s launch haven’t kept pace with the rest of the experience, so complex systems are completely opaque. But for all of Warframe’s different components and mechanics, it still feels welcoming, even to newbies. While it doesn’t hold your hand, per se, it has clear language that describes how everything works inside the game. New players don’t need to dive into hundred page FAQs to understand how different frames (the avatars that determine your play style and abilities) work or where to find the blueprints they want, as Warframe packs all of that data into the game. And the basic way the game plays is intuitive and will feel natural for anyone that’s played an action game in the last decade.

What about more experienced players?

But for all that, it doesn’t sacrifice complexity for ease-of-use. For veterans, or even for new players that are looking for a deeper-than-average experience out of their online shooter, Warframe provides lots of moving parts and deep systems to keep you engaged. It’s also piled up the level of content and advanced loot you’d expect from an online game in its fourth year of existence, so there’s plenty of incentive to keep hunting for upgrades or new weapons, even for players deep into the end game.

Is Warframe full of loot grinding?

That kind of loot drive is one of the best ways Warframe has been refined since it launched. Whereas a lot of games, especially other looter shooters, demand a huge investment of time and effort from their players but are very spartan with their rewards, Warframe hews closer to the Destiny approach, ensuring that players are rewarded frequently and meaningfully. Every frame requires a certain number of blueprints to unlock, and almost every time you beat one of the game’s varied bosses one of those crucial blueprints will come tumbling out. I find that even if I’m not actively chasing a specific frame, getting other blueprints (or weapons) feels really satisfying. The dramatically different ways that each frame plays, with suites of abilities that range from teleportation to frost novas to sonic booms, mean that every unlock feels new and exciting. Even if you don’t end up loving a new frame, they all provide the chance to experiment with playing the game in a totally different way.

Is my character tied to a single frame?

This is another great hook in Warframe’s arsenal. Instead of locking you into one race or class per character, it allows you to sample a huge number of frames with the same character. There’s no rolling a new toon and replaying the same intro content you’ve played a thousand of times, and then laboriously leveling until you get a real taste of what each class offers. Switching frames is as easy as pressing a button, and most of the frames come factory-standard with a representative set of abilities and upgrades.

Do I need to spend real money to enjoy Warframe?

While a lot of free to play games promise all their content is available for free, this usually means committing hundreds of hours to a brutal, repetitive grind before you finally unlock the content you want (by which time you’re often so exhausted with the game that you no longer want to play with said new content). Warframe does a good job of making all its content attainable in a reasonable way, and if and when you do decide to shell out some of your hard earned cash, it provides solid value that feels commensurate with the amount of money spent. It also does an excellent job of not constantly trying to lure you to its storefront with deceptive links and non-stop, in-your-face promotions. If you want to drop a few bucks, it’s easy enough to do, but if you’d rather not, Warframe doesn’t go out of its way to make you feel like a leech or a bottom feeder.

I tried Warframe in the past, is it worth going back?

Best of all, if you jumped on the Warframe bandwagon early but haven’t popped in for a while, there's a steady drip of tweaks, improvements, and expansions. Warframe is a game that I find myself diving back into every couple of months, and almost without fail there’s something new to play with or some new feature to test that pulls me back in. It’s a game that knows how to capitalize on the fact that it’s persistent, and with over three years of development under its belt, it’s busting at the seams with stuff to do for those who have never dipped their toes in.  To paraphrase that old saw, there’s never been a better time to get your Tenno on.