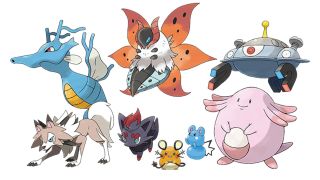 It's the the road to Pokemon Day 2020 and Google has officially opened the polls for the Pokemon of the Year vote. Pokemon Day falls on February 27, but the votes will close well before that, so act fast.

You can vote here or by typing "Pokemon vote" into the Google search bar. Voting will remain open from 6am PST on February 5 to 5:59am PST on February 14. To vote, just select the region your fave Pokemon was first found in and find them on the list, which is sorted by National Pokedex number. And all 890 Pokemon from every region are included, so don't fret.

You'll have to sign in using a Google account as you're only allowed one vote per category per day, for a maximum of eight votes daily. Google will tally your vote which "cannot be deleted" in case you change your mind about Mr. Mime (I'm not saying you should, but at least consider it). According to the official blog post announcing the competition, "votes will be counted based on the Pokemon's National Pokedex number, even for Pokemon that have multiple forms, including regional forms."

After the debacle that was the Democratic caucus in Iowa, here's hoping there's no issue tallying the numbers for this competition, which is arguably more important. Which Pokemon will reign supreme? We'll have to wait to find out.

The lead up to Pokemon Day will include a handful of other fun events across Pokemon Go and Pokemon Sword and Shield, including the announcement of a new Mythical Pokemon, so stay tuned.

Want to stay up to date with all of the latest releases on Nintendo's console? Here are all of the best upcoming Switch games.