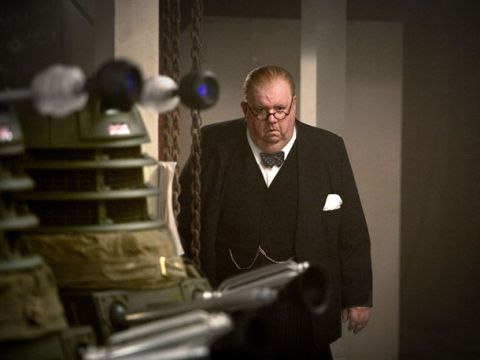 TV REVIEW: Doctor Who 5.03 – Once more into the breach dear Doctor

The One Where : Churchill and the Daleks team up to fight Hitler, but the Doctor knows you can never trust a pepper-pot.

Verdict : Tally ho chaps The Doctor and Amy are off to war. It’s all blitz sprit and suitably authentic cabinet war rooms (with a delightfully retro Dalek poster thrown in for good measure) as Churchill shows the pair his secret weapon that will win Britain the war.

Make the most of it while you can though because by episode’s end the classic Raymond Cusick design, one that even survived the Russell T Davies revamp largely intact, is usurped by the Technicolor kids of Skaro. It’s a brave new look, much more in-tune with this season’s child-friendly, fairytale, vibe and despite being literally smoother round the edges their sheer heft, chunky shells and baritone voiceboxes distinguish them as an equally intimidating new breed.

Elsewhere it’s a mixed bag with twists a plenty, an action-packed second half and enough going on that makes you wonder if "Victory Of The Daleks" would have been better served by a double episode. As a result it all feels a little rushed, particularly as WW2 is a period that has still to be mined effectively since 2005, and one perfect for a Dalek story seeing as the Doctor’s greatest enemy were a metaphor for the Nazis in the first place.

The concept – Churchill vs The Daleks! – is so good you want to like the episode more than you actually do. There’s a disappointing lack of quotable dialogue (though there are a few gems) and the Doctor’s distrustful manner for the first half means there’s less of the playful banter and wacky mannerisms the season has excelled in so far.

Despite these reservations, however, the episode is still rollicking good fun. The Star Wars -inspired space battle is the highlight, easily this season’s most impressive visual effects sequence, even if it’s a little on the short side (must be where they spent the budget meant for the set of the Dalek ship). Both guest stars also put on a jolly good show, Ian McNiece especially emerges from behind the comedy cigar and clichés as a lovably bumbling Churchill.

Meanwhile the overly familiar, race-against-the-clock-to-defuse-the-bomb climax provides a very human pay-off to the story of a decidedly non-human android. Amy saves the day again, echoing the previous episode’s finale, but it’s the insight into the two characters’ spirits that satisfies most – the Doctor attempting to solve the problem with allusions to death while Amy opts for love. It’s her understanding of human nature which makes her such an invaluable companion and not just a pretty face.

Not bad then, it just feels like a little undercooked and for an episode that hinges around revealing the new look Daleks, it’s a shame everyone had already seem ‘em.

Who reference : Daleks pretending to be the servants of mankind is a plotline directly inspired by “Power Of The Daleks”, Patrick Troughton’s first story. Sadly it’s one of the “lost” Who stories so you can only hear it on audiobook.

Who reference 2 : The Doctor pretending the Jammie Dodger is a piece of technology is similar to Tom Baker claiming a jelly baby was a weapon in “The Face Of Evil”.

Inspiration : The Daleks have a hint of the '60s Dalek comic strip from TV 21 about them, particularly the Ron Turner art .

Reference : Probably one for the kids this (and cinematic lightweights) “Broadsword to Danny Boy” is a reference to classic war movie Where Eagles Dare (where it's "Broadsword calling Danny Boy") which, along with other bank holiday war movies like The Great Escape , is an obvious influence on "Victory Of The Daleks".

The wrong trousers : Nice to see Amy in her own clothes for the first time, but it’s not exactly the most appropriate wartime outfit we could think of.

Rubbing it in : SFX were on set for "Victory Of The Daleks", on the Dalek ship set to be exact. Just saying.

Speculation : Amy’s forgotten about the Dalek invasion? We’re guessing it’s not a Donna Noble-style case of always in the wrong place at wrong time. Could that crack be causing havoc with the time line?

Best Lines :
Amy : “So What do we do? Is this what we do now, chase after them?”
Doctor : “This is what I do yes and it’s dangerous so you wait here.”
Amy : “What so you mean I’ve got to stay safe down here in the middle of the London Blitz .”
Doctor : “Safe as it gets around me.”