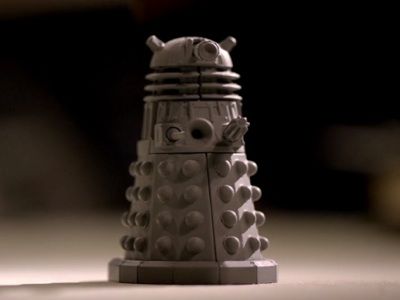 Back in the day, we used to do a kind of review in the SFX Doctor Who Collectors’ Editions that we know a lot of you used to like (even if it was only “like to pick holes in”, but hey, that’s what the internet’s for). The format was a minute-by-minute breakdown of the episodes with instant reactions, bits of trivia, random thoughts and even bloopers and in-jokes.

Remember, the following is full of personal views, so feel free to attack my comments with as much vigour as you like. It’s all part of the fun. Also, we have the advantage of the internet this time, so if you spot in-jokes or bloopers I didn’t, feel free to submit them for possible inclusion.

And if you enjoy the following, let us know, and we might go back and do the first two episodes and continue to do them for the rest of the season.

00:00 A great, short, to-the-point teaser with a great into-the-title sequence mini-cliffhanger. The little Dalek figurine is an amusing touch.

00:19 Ian McNiece guest stars as Churchill. He certainly looks the part and during the teaser is everything you’d want from Churchill, but over the course of the episode his performance is disappointingly comedic and lightweight. At least one scene in which he gets to show that guile and steeliness that made him such a amazing wartime leader would have been welcome. Previous New Who Historical figures have been played for laughs, sure, but they’ve also had moments of depth and humanity. Churchill comes across more like a caricature throughout.

02:22 “You’re late by the way.” Matt Smith looking gawkily at his watch is a wonderfully Doctor Eleven moment. The Doctor and Churchill’s relationship is great fun. But is this Doctor going to be recognised wherever he goes (re: Liz 10)? What happened to the old days when his arrival was greeted with suspicion?

03:57 Lovely FX shot of the wartime London skyscape, but aren’t those barrage balloons a little low?

04:16 Okay, we’ve all guessed what the secret weapon is, but it’s still cool to see (and hear) the Dalek’s weapon in action destroying the Stukkas, before we actually get to see the Dalek.

04:19 The army-fatigue Dalek is just a brilliant image, and it makes a great entrance. Its muted armour against the sandbags seems much more impressive than rainbow legion of Next Gen Daleks we get to see later.

05:10 Doctor Eleven’s disgusted reaction to the DalekS is reminiscent of Doctor Nine’s in “Dalek”. Great nervous jittery performance from Matt Smith that sets him apart from his two immediate predecessors, though.

05:27 TRIVA The Dalek voice is referred to as "Tannoy" on the blueprints. Tannoy did supply the armed forces with PA systems during WWII.

05:59 SHOT OF THE EPISODE: beautifully framed, wonderful expression from Matt, and a Dalek that couldn’t look more devious than it tried. There’s more threat, tension and power in this one shot than the rest of the episode put together.

06:12 How many fans will make their own versions of this poster? Expect to it pressganged into use as Avatars internet-wide? Wouldn’t be as good with the tubby, Lego Daleks, would it?

06:34 This is just brilliant. The Doctor helpless to convince Churchill of the monsters he is harbouring as the Daleks innocent (but spookily) perform mundane duties, like carrying files and making tea. This is the episode at its best. Matt plays the unease superbly.

06:43 MYTHOLOGY Amy: “What would I know about the Daleks?” Intriguing. So Amy knows nothing about the Dalek invasion of Earth in either “Doomsday” (2006) or "The Stolen Earth”/"Journey’s End” (2008). Where does this lass come from? Is it somehow connected to the cracks in time?

08:26 Matt’s delivery of, “Shut it!” to the Dalek is a delight. It’s in these moments he truly is a new Doctor. There's nothing Tennant – or any other previous Doctor – about is at all.

09:32 GREAT LINE "Would you care for some tea?” You have to chuckle as a Dalek spouting that. But at the same time, it’s so creepy…

11:24 GREAT MOMENT This attack on the Dalek with wrench is blisteringly powerful, and quite extraordinary, a true stand-out moment in the episode, well written and unexpected. You can just feel Doctor Eleven’s pent-up frustration bubbling over. Great sound FX too.

12:27 “Correct!” And so, everything starts to go a little bit awry. Just over a quarter of the way into the episode and the best thing about the episode – sneaky Daleks ingratiating themselves into the war effort – is dispensed with. Up until now this has been a pretty decent episode with lots of intrigue and atmosphere, but from here on in the tone changes into more of s romp. An enjoyable romp, with lots of fun moments, but somehow a but lightweight after the set-up (and for the return of the Daleks). Shame, really, that the atmospheric build up couldn’t have continued longer with a couple more plot twists before the big reveal. The pacing just seems very lopsided – it’s like 12 minutes of plot and 25 minutes of denouement.

12:31 “Review testimony.” Having said that, the “testimony” angle is a fascinating new hook.

12:47 Great FX shot! You can’t beat a good clapped out spaceship hiding behind the moon!

12:56 Well, there have been gags about Daleks being pepper pots since 1963, but we never thought a Dalek pepper shaker would actually become canon.

13:30 Wasn’t expecting that! The Dalek’s shoot off Bracewell’s hand revealing him as a robot. “We created you.”

13:58 “I was their plan.” They seem to have missed a trick here. Surely the Doctor would be even more aggrieved by the fact that he’s just goaded the Daleks into antagonistic mode?

14:49 BLOOPER Or is it? It seems so deliberate you wonder if it’s a stylistic choice. As the TARDIS dematerialises Amy’s hair blows in the wind away from the ship, but Churchill’s (possibly CG-enhanced?) cigar smoke floats towards the ship.

16:12 The TARDIS self-destruct, aka, a Jammie Dodger – brilliant touch. One of the episode’s masterstokes.

17:33 “A solution was devised.” “Yes, yes, yes, me, my testimony.” Again, wouldn’t the Doctor be more aggrieved that he has helped to create a new race of Daleks? Matt’s performance here seems to lack a certain gravitas, but that’s partly because the script isn’t really giving him much to work with. It seems a bit too, “Doctor rant by numbers.”

18:15 The shot of the lights coming on in London lacks the necessary clout because 1) it’s actually a pretty perfunctory FX shot, and b) we haven’t been given an indication in the script how important the blackout was. It needed more build up than one comedy old gent yelling, “Switch that light out.” Plus, how many Londoners does it take to unscrew a light bulb?

19:50 MYTHOLOGY Ah, that old Dalek control room sound effect again, in use since 1963. And put to great use here.

20:15 And introducing the Teletubby/Lego/Teenage Turtle Daleks. These multicoloured monsters look like they’ve come for the Dorothy auditions a programme too early. And the humped backs give them a really silhouette that looks slightly odd and comical. They look impressive from some angles, but overall, despite the extra height, they look a bit cartoony. I know some people hate them. I don’t, but certainly prefer the more classic design. Maybe they’ll grown on us. And how, exactly, does Dalek DNA create new casings?

21:01 Bracewell’s self-loathing at discovering what his true nature is a nice touch, but is dealt with in a rather off-hand, half-hearted way. It needed to have a more emotional sting.

23:00 Love the way the new Daleks so casually destroy the old ones – it’s a very Dalek thing to do – but you can’t help be sad that we seem to be saying goodbye to the superior, old design.

23:21 GREAT LINE “Don’t mess with me, sweetheart.” Delivered so deliciously, this has already become a a but of an internet meme (just Google the phrase)

23:36 “At last! Are they ready?" Oh dear. We're supposed to believe Bracewell has created space-worthy Spitfires (and a Dalek scanner) in, seemingly , his tea break? That’s not stretching credulity, it’s blowing credulity up with an atom bomb. A simple extra line about, “What about those prototypes you had ready?” or something would have helped. Don’t get me wrong, I have no problem with Spitfires in space – that’s just an audaciously silly piece of New Who audacity that’s enormous escapist. But come on, there needs to be some kind of logical context!

25:13 Unfortunately, this Elevenism is immediately followed up by a Tenism, “You beauty.” The writers really should avoid putting words in Matt Smith’s mouth that immediately make viewers think of Tennant. It’s a dangerous game to play.

25:15 These FX shots of the Spitfires versus the Dalek ship are beautiful. Classic Who imagery.

28:04 “Bracewell is a bomb.” That’s as near as we’ll get to a Dalek saying, “Touché” or twiddling its moustache

28:54 "Then choose Doctor. Destroy the Daleks or save the Earth.” It’s a great moral dilemma, but again, it’s not played up enough in the script, leaving Matt Smith to try to convey everything with a sulky grimmace.

30:13 SONIC SCREWDRIVER Opening up Bracewell, then fiddling about with his innards.

30:22 MYTHOLOGY The Daleks previously used a time corridor in “Resurrection Of The Daleks” (1984).

30:26 The Daleks count in Rels, the system created in the first ’60s Peter Cushing Doctor Who movie, and reintroduced into New Who in “Doomsday” (2006),

30:56 “Tell me about your life.” Hmmmm, convincing a robot to get in touch with its inner feelings to defuse a bomb? Ladies and gentlemen, logic has just left the building. Shame, because this is actually a quite powerful, touching scene, derailed by the fact that it makes no sense. All it needs is some line about, “If he gains control of his emotions he can gain control of his programming.” Or something – anything – to make it more palatable.

35:20 TRIVIA This shot of the soldiers is clearly supposed to evoke the classic image of American soldiers planting the flag on Iwo Jima. Not sure why.

36:24 It seems like the Doctor is about to paraphrase Churchill’s "Darkest hour” speech, but he never quite gets round to it.

37:27 “KBO” was a phrase coined by Churchill, standing for, “Keep buggering on.” Watch it pass into popular internet usage from here on…

37:36 This scene with the Doctor convincing Bracewell to go on the run is amusing and touching but goes on a bit…

37:38 IN JOKE “I’ve been expecting you, Doctor.” With his black glove and lab coat Bracewell now looks like Dr No, and paraphrases a Bond cliché

39:20 GREAT LINE Amy: “So you have enemies, then?”
The Doctor: “Everybody’s got enemies.”
Amy: “Yeah, but mine’s the woman outside Budgens with the mental Jack Russell. You’ve got, you know, arch enemies.”

40:33 THE CRACK! Not sure why some people have a problem with the cracks being so obvious. It’s clearly not meant to be an-joke to only be picked up by fans. It’s part of an arc plot that Moffat clearly wants everyone to notice.