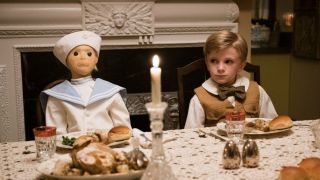 If you’ve got a great big horror gap in your life – or have just come back from behind the sofa after watching It – then Amazon’s new anthology series, Lore, might just be the ticket. Based on a long-running podcast series, the six episodes (out now on Amazon Prime) look at the historical influences behind some of horror’s biggest scares. Yes, possessed dolls might be real now.

Lore isn’t your traditional horror fare though. Taking a cue from Aaron Mahnke’s podcast series of the same name, the show blends a whole host of different techniques to keep your hairs standing on end. T2’s Robert Patrick, who stars in the fourth episode, explains to The National: “They’re using different media, cartoons, archival footage, stills, film, narration and they’re bringing it together and they’re giving the actor the opportunity to create the live part, the re-enactment and the dramatic part of the story. It’s really done very, very well. It’s very creepy.”

I’m getting slight Making a Murderer x Serial vibes from this, which can’t be a bad thing. By forging a horror story through good ol’ facts only add to the tension and intrigue, especially once you see what the show’s got in store.

Stretching from Ireland, to America, and across mainland Europe through the past 400 years, Lore digs deep into the dramatic and deadly stories that have inspired many a fireside ghost tale – and will probably give you a few nightmares to boot.

The full episode list can be found here, but there’s something for everyone: a haunted house, changelings, werewolves and, yup, those possessed dolls. Hold me.