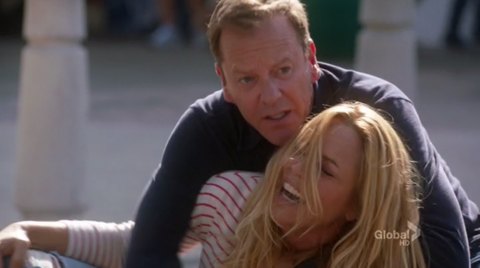 THE ONE WHERE Jake and Amelia scheme together so they can meet up, but Amelia is kidnapped again before it can happen. Lucy then takes matters into her own hands and hits Calvin with her car. Revenge momma ahoy!

VERDICT This episode really should have had a bigger impact, but – decent ending aside – it ends up being so middling you spend half of it wondering whether to go and make a cup of tea. There's just no thrust to the plot: it's limp and seems to drag, even though things are happening. There are also some incredibly painful logic holes, each of them massively aggravating. The first is Martin leaving Jake with strangers for a play date just minutes after discovering he's being followed by someone who wants to kidnap the kid (really, what kind of dad would do that?). Not only that, but he doesn't even bother to tell those strangers that his son is autistic and has special requirements – sure, their daughter Soleil may have told them already, or they could have discussed it on the phone, but we have to assume it's been done because nobody seems to care when the handover happens. Awful!

There are two other nagging issues as well: what self-respecting kidnapper would take his victim to a hospital and then allow a nurse to take him away to treat a tiny cut on his face, thus allowing the girl to be on her own? So much money, time and law-breaking poured into Amelia's care, and yet he lets her escape so easily? Pathetic! Let's hope Calvin has his 'nads for being so dumb!

And then there's the moment when Amelia is kidnapped again, on a pier in full daylight surrounded by hundreds of people, with her mother screaming her name like a maniac over and over (boy, can Maria Bello holler when required). Are we really supposed to assume that not a single person steps in to help, chase the car, take the licence plate, call the police... anything? Half the extras acting as bystanders ignore the whole thing, while others make cursory attempts to look shocked. If there's any moment, at all, at which Touch jumps the shark, it's this one. It's as though Martin, Jake and Lucy live in a bubble and their actions don't affect anybody around them – which is completely contrary to what Touch is supposed to be about. Utterly unbelievable.

However, luckily there's the ending, in which Lucy snaps and deliberately hits Calvin with her car. It's not as dramatic as it should have been – it could've benefited from a bigger build-up, or Lucy having some kind of breakdown first – but the final shot of her standing over Calvin's moaning body is great. What will happen now?

GOLDEN BROWN Touch has often used coloured lens filters or computerised effects to make other countries stand out from the American scenes, but we can't help but think the sepia-coloured filters being used to signify Mexico this week are a little overdone. This church, for example, while pretty, looks as though it's being filmed through a lens smeared with instant coffee. [ Isn’t there a setting for that effect on Instagram ? - ed ]

BEAUTIFUL DREAMERS This week's big revelation: Ortiz is one of the 36. Clearly his particular “gift” is being completely barking cuckoo.

NUMBERS GAME This week's number is 8877. Appearances include the number of a bus, the address of an amusement arcade, the reading on a microwave, the number on an entry pad, and as a grid co-ordinate.

AH, L'AMOUR... Soleil's mum describes her daughter and Jake's budding romance brilliantly: “Those two, they are just a fork and a spoon!”

LUCY AND TREVOR 4EVA I don't know why but I'm lovin' these guys working together – their high-five this week after finding out some important information really made me giggle.

MMM, CHEWY... This episode has its downsides, but it does raise that age-old moral question: if someone confesses murder to a priest, what does the priest do about it, given the vow of secrecy? This particular guy wrestles with his conscience, then goes to the police. A fellow priest tells him he'll be excommunicated for doing so, which might be a slight dig by the writers at the fact priests who threatened to expose child abuse in the Catholic Church were told the same thing. Topical...

HIS NAME'S BAUER... JACK BAUER Martin's getting more Bauer-ish every week now – perhaps someone's told the writers to harden him up a bit? This week's hard-man antics include knowing that a car's following him (we wouldn't have noticed) and then dragging the driver out and beating him up. Lucy's clearly been taking lessons from him, too, judging by her, “I'll inject your brother with poison!” and “I will run you over!” behaviour.

BEST LINE
Soleil: “I watch Cupcake Wars , and you do not serve a cupcake without a wrapper.”