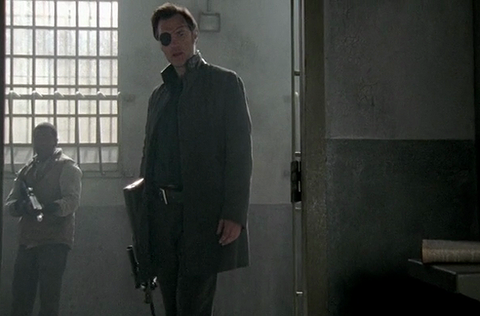 The Walking Dead 3.16 "Welcome To The Tombs" TV REVIEW

So, farewell season three and goodbye Glen Mazzara, who turns in one final episode before departing to less zombie-filled pastures.

Fittingly, “Welcome To The Tombs” feels like both an ending and a new beginning for the series. The Woodbury arc is wrapped up, the Governor cut loose, and there are the first hints of a major new problem to tackle, in the unlikely form of Carl.

Let's start with the Governor. The episode opens with an extreme close up of his eye, just to ram home the point that, yes, he's gone a bit mad. His main focus this week is leading the assault on the prison. The Woodbury crew has got more people and guns than Rick's gang, so it should be a pushover, right? Wrong. Clearly Philip has never seen Home Alone , because he leads everyone straight into a series of booby traps. There's no paint tins on string though, sadly.

Alas, the big battle when it came, was disappointing. Glenn and Maggie driving the invaders off felt like the end of the first stage of the assault, not the actual end. But yes, that was it. This shambolic defeat was then followed up by the Governor – in a moment of self-defeating madness – killing all of his own people. Yeah, it's the sort of thing a psychopath might do, but it also felt like a hurried, and rather too neat way of wrapping up the Woodbury arc. All of those pesky survivors? Not a problem now. Handily, not present were Tyreese and Sasha who elected to stay behind in Woodbury. By the end of the episode they've aligned themselves with Rick. Hopefully season four will do something interesting with them.

And so off the Governor skipped to live and fight another day. I'm not sorry that he survived – David Morrissey makes for a marvellously malicious villain, and I'll be glad to see him return. But at the same time, you've got to wonder if his character arc has run its natural course. He's gone from being a nasty dictator, to a foaming-at-the-mouth madman. Where else is there left for him to go?

Happily, while the battle was a let down, the conclusion to Andrea's storyline was much more satisfying. She spends the episode locked in the Governor's sex dungeon with a dying Milton. It looks like Rick & co will turn up just in the nick of time. But, er, they don't. Instead, Milton turns, bites her, and she takes her own life, with a heartbroken Michonne at her side. It's another big diversion from the comic (where Andrea remains alive and well to this day), but is a solidly emotional payoff to the season. For all of the character's uselessness recently, it's a shame to see Laurie Holden go. But what an exit!

There was another lesser, but still effective twist in the episode: Carl's cold-blooded murder of an innocent teenager. The kid is clearly surrendering, but Carl shoots him anyway. He's obviously aping his dad's callous actions earlier in the season, and it's satisfying to see some consequences to Rick being a giant douche. Quite where this will go in season four is anyone's guess... I can't imagine Carl becoming a threat to the group. Still, it's going to take a lot to drag him back from the brink of real darkness.

The Walking Dead has been both brilliant and frustrating this season. The first half was almost uniformly excellent, bringing both a renewed sense of tension to the series and making Rick a far more interesting lead. But the second half missed as often as it hit. There's still a sense that this show still hasn't quite found the right balance of horror, action and characterisation. But season four promises a fresh start: a new showrunner, new characters and a stated ambition to make the zombie's properly threatening again – something season three moved away from by focussing on the human enemies for so long. If they can fix that, work out what to do with Tyreese, introduce a strong female lead (Michonne is great, but so one-note she's barely human) and develop Carl further, it'll be great.

THE BUCKET LIST Well I was entirely wrong last week about who would live and die. Apart from Milton, but that was screamingly obvious. Poor Dallas Roberts – his character was just getting interesting.

BEST LINE
The Governor: “In this life now, you kill or you die, or you die and you kill.”

• Read all our The Walking Dead season 3 reviews