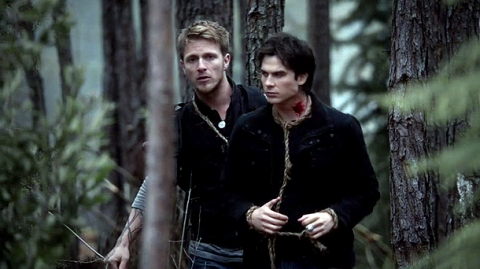 The Vampire Diaries 4.14 “Down The Rabbit Hole” TV REVIEW

THE ONE WHERE Klaus works out that there’s only one dose of vampire cure, and suddenly it’s every vamp for themselves; Katherine appears from nowhere to wake up Silas, who kills Jeremy.

VERDICT Only one dose of vampire cure, eh? Well, that was a twist and a half. In retrospect a rather obvious one – you’d think somebody would have been canny enough to go, “What if, like, there’s only a tiny bottle of Vampire Anadin?” – but all credit to the show for making this loophole too obvious beforehand.

It also puts the cat amongst the pigeons, as all previous plans go out of the window and old allegiances bite the dust. It’s great to see Rebekah reflecting what most of the audience is probably thinking: “Oh great, those Salvatores are going to leap over each other to ram the cure down Elena’s throat.” Surprisingly, Elena voices such a spirited rebuttal to the idea that she must “be the one” you can almost believe by episode’s end that she’s convinced herself that she’ll pass up the opportunity (personally we think she’s enjoying being Damon’s bitch a little too much…). On the other hand, everybody spends so much of the episode trying to push Elena out of the way so they can have private tête à têtes without her, it’s a surprise the girl isn’t a paranoid wreck.

Aside from the twist, there’s loads more to cherish here. There’s Klaus in Hannibal-Lecter-mode, clearly beginning to enjoy the fact he can still needle and manipulate people even when imprisoned. And while he has some great lines ("Might I suggest using the magic of the internet to purchase an Aramaic to English dictionary from your nearest retailer?”) it’d good to hear Damon back on zinger form after a few weeks where he’s been off the boil (see Best Line).

Vaughn, when you can understand him (this is not a Scottish accent problem, it’s a weird delivery problem), is a great, kick-ass hunter with an impressive armoury. Stefan, Elena, Rebekah and Damon have some sweet heart-to-heart moments. Katherine makes a welcome return, and makes an immediate impact by getting Jeremy killed. Even though death need not be fatal in fantasy, it remains a chillingly effective shock.

Shane lying about with a broken leg looking all self-pitying is a little, erm, lame, while Caroline and Tyler’s goodbye scene goes on way too long. It almost feel like the writer figured if he kept it going long enough, sooner or later the scene might find some emotional resonance by sheer luck. It doesn’t. It just drags. You half wish Bonnie’s magic cell would could have run out of magic juice five minutes earlier so Klaus could have escaped and murdered Tyler horribly.

Hopefully now Tyler’s gone that’s the last we’ll see of werewolves for a while… (not that I’m biased or anything).

WHAT A MUMBLER Okay, so we have a major new character – a Hunter no less. And he’s called…? Erm, hang on mate – what was that? “My name is Grmmamaamemmamvammerr.” Good grief, he makes Mickey Rourke sound like Brian Sewell. A quick experiment in the office – where we asked people to see if they could work out what he was saying first time – came up with the following suggestions:

The real answer is Galen Vaughn. But we had to look it up on the internet. He’s played, by the way, by Charlie Bewley, previous best known as Demetri, one of the less prominent Volturi in four of The Twilight Saga films.

“I HAVE OTHER TOYS” Mumbler he may have been, but we still loved Vaughn for his James Bond-gadget approach to vampire slaying.

DEATH BED Although we’re not entirely convinced that Jeremy will stay dead (Silas has a reputation for resurrection, after all), the shot of him lying dead by Silas’s tomb had a curiously Pre-Raphaelite look to it.

EXPRESSION OF THE WEEK The normally dour Vaughn looks like he’s been caught off guard by a woman flashing her breasts just off camera.

KINKY We know it’s just the angle, but Bonnie looks like she’s trying to light a different sort of candle to usual here…

AWW PRETTY Who’s a lucky director who spotted a nice sunset while on location, then? It does remind us, though, that this episode must hold the record for “most dialogue conducted over a cell phone network”.

INTERESTING TURN OF PHRASE “I’ve seen every side of vampirism there is… the power, the misery, the guilt. In the long run, even the good parts kinda suck too.” Well, sucking does come with the territory, Stefan.

BEST DELIVERED LINE Klaus rolling the words, “Mercy. For Tyler…” round his mouth like he’s been forced to taste a particularly foul brand of supermarket wine, before spitting it out.

BEST LINE: Damon: “I don’t know why anyone wouldn’t want to be a vampire. You know, if I wasn’t a vampire, I wouldn’t be able to do nine of the things I’m going to do to you when I’m free…” [Vaughn hits him] “…Make that ten.”

• Read more of our reviews for The Vampire Diaries season four
• Need to find an episode review? Check out our new TV Reviews Index