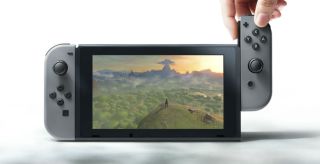 Welcome to the new Nintendo. It might be hard to see beneath the surface of the trailer for its new gaming device, but the company that tried to sell the world Wii U - is it a console or a peripheral or a spelling error - is no longer tongue tied about its message. Whether or not the Switch is going to take over the gaming world won’t be answered until March 2017. What we know today, at least, is that Nintendo is getting over some of its worst habits and is communicating with its audience about what is valuable and enticing about its new machine.

The Nintendo Switch’s reveal, coming after two long years of bizarre and vague corporate assurances that Nintendo was working on a groundbreaking successor to Wii U and 3DS, is classic 21st century Nintendo. Here are the fancy young professionals playing the video games! The man who must walk his dog can slide his Switch controllers into the console and keep on playing The Legend of Zelda: Breath of the Wild. The fashionable bad boy punk band can play a brand new Mario Kart on the go. Splatoon teams around the world can practice their squiddy skills in a bonafide eSports locker room sharing the two detachable Switch controllers in portable more before carrying them onto the big stage and plugging into a jumbotron with the dock. Even Amelie - okay that woman playing what appeared to be a new Super Mario 3D World only looked like Amelie - can join her friends’ roof party and take the game with her, no need for dragging the whole Wii console or syncing other remotes.

This is the kind of Hip Youthful Millennial Branding Nintendo has been attempting since before the word millennial was ubiquitous. They tried it with the “Who Are You?” ads of the Gamecube and Game Boy Advance era. They tried it with the very first Wii “sizzle reel,” an attempt to position the original motion control machine as something for everyone; casual, playful sports for couples and hardcore action for diehard gamers, all the 2006 equivalent of the fancy sitcom types here. What could be considered a typically cynical attempt at coolness--a definitive, “What’s up, fellow kids?” moment after the disastrous sales of Wii U--actually shows a very positive change for Nintendo. Rather than trying to use limp commercial fashion to sell a machine that’s still a long way from release or trying to force an air of coolness, Nintendo explained precisely what Switch is, showed off a selection of recognizable but new games for it, and demonstrated every single feature of the device without ever speaking a word.

If your response to that assessment is, “Well, no duh, poindexter! That’s what a trailer’s supposed to do!” keep in mind that most of the time trailers don’t do that. Watch the Wii trailer from E3 2006, a trailer that came almost a year after Nintendo revealed the Wii controller without actually demonstrating how it would work, and you’ll see that the Nintendo of the past tended to reveal its consoles with absolutely zero useful information about functionality. We see people waving their arms and tapping their feet and having a jolly good time, but we don’t actually see what it’s going to be like to use the damn thing in practice. The Wii U’s reveal was even worse. At E3 2011, Nintendo finally showed off the tablet controller for Wii U and announced its name, but they refused to show the console itself and the big debut trailer was this bizarre tone piece tech demo. Sweet. So Wii U is a Palm Pilot with a penchant for tranquil birds? The result of that terrible communication was that most people that had even heard of the Wii U (which wasn’t many) weren’t sure if it was a new console or actually just an add on to the original Wii. And no amount of fashion first commercials could save its launch in 2012.

With the Nintendo Switch reveal, though, we get tangible, useful information throughout. We see how easy it is to slide the detachable controller parts into the portable tablet and automatically keep playing the same game of Zelda that was running on the television. We see that the device is indeed going to use cartridges when Zelda fan number one slides a cart into it on an airplane, where he can set up the tablet screen on a kickstand, Microsoft Surface style. We see two USB ports clearly on the side of the dock for charging the snazzy looking Wii U Pro Controller successor that the Splatoon team is using. And throughout we see new games looking at the very least comparable to the HD visuals from Wii U: Zelda, a new Mario 3D World, a new Mario Kart, new Splatoon, and even appearances from The Elder Scrolls 5: Skyrim Special Edition and NBA 2K. Those latter two especially say that even if Nintendo Switch is primarily a Nintendo game playing machine, much like every device it’s made in the past 20 years, enormously popular series from traditionally anti-Nintendo partners like Bethesda and 2K Games will be represented.

That is more information about a new Nintendo console than we typically find out in the first year after the announcement. We’ve seen how the device works, what it plays, and what it’s value is: it’s got the multiplayer potential of Wii, the high quality games of Wii U and 3DS, and there’s no delineation between portable and home. A single Switch will let you play multiplayer Mario Kart and there’s a cartridge so you don’t have to worry about gumming up expensive internal flash memory. It’ll be out in March 2017. Boom. Done.

Now we just need to know how much the damn thing costs.