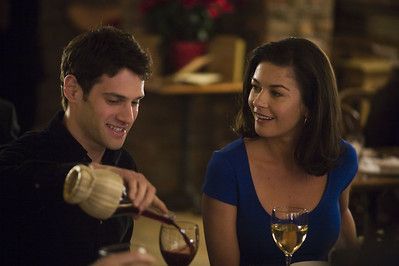 The Rebound review - Things we know about Catherine Zeta-Jones. She can do sexy, feisty and flinty in her sleep. She likes an older gent. She doesn’t inspire warm-fuzzies, especially when she’s declaring that she and him-indoors consider $1m “not a lot of money to us”. She’s beautiful, accomplished and… well, sort of hard to like.

As they muddle along, she finds a new lease of life pursuing a career in sports newscasting while he’s dithering over his future but happy to be a big kid with hers. They’re a makeshift family, so how long before Sandy and Aram start to play mummies and daddies for real? And what will her sniffy fortysomething friends think?

Written and directed by Julianne Moore’s other half, Bart Freundlich, The Rebound does nothing new but does it, for the most part, well. Zeta-Jones and Bartha have sweet chemistry together and it’s refreshing to see her portray uncertainty with elements of frumpiness and doggedness.

Freundlich gives standard romcom scenarios a lightness of touch and a welcome sense of maturity (on their first kiss, Sandy pulls away and instructs Aram to use less tongue).

Unfortunately, there are also some woefully broad comedy strokes. A lesbian/ feminist self-defence class is pratfalling horror and a literally shitty date feels like it’s scooped from another movie. And CZJ’s so-called sultry dance moves at a party induce feelings of fontrum akin to watching her hubby’s grandad shimmy back in Basic Instinct.

But the obligatory third-act split does at least feel more authentic than many others, while the final reel is happy to celebrate the privileges and experiences afforded to both the young and the beenaround- the-block.