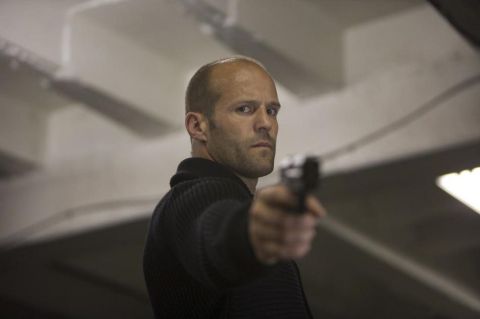 The scowl. The muscles. The remorseless acts of violence. Jason Statham IS The Transporter! Oh, no, hang on – The Mechanic! Oh, who cares?

By now Statham is essentially his own sub-genre, and Con Air director Simon West’s first film in three years wastes no time in giving us some full-frontal Stath-porn. Within five minutes, we’ve had a witty underwater kill and – hello! – out comes Statham’s hairy chest.

Looking, as ever, like he’s been injecting raw steaks into his arms, Statham is lone-wolf hitman Arthur Bishop, an expert in assassinations that look like accidents: he’ll whack the target then vanish like he was never there.

He’s also the kind of man who wears a black rollneck and a leather jacket to a bar and still has wham-bang sex with a Victoria’s Secret model. Smooth.

Having been duped into whacking his mentor and only friend (Donald Sutherland, literally coasting in a wheelchair), Statham then takes the man’s alcoholic son (Ben Foster) as his apprentice. Because that couldn’t backfire, right?

X-Men: The Last Stand’s Foster (a kind of budget Ryan Gosling) is quite cool as Statham’s wisecracking, whisky-skulling protégé, while bad guy Tony Goldwyn (brother of Paramount Studios’ president, director of Conviction) grabs the film’s standout zinger: “I’m going to put a price on your head so big that when you look in the mirror your reflection is gonna want to shoot you in the face.”

Bravo, sir. And if you like that, you’ll love the violence.

Whether it’s hand-to-hand (Foster brutally hurled through bookcases by a 7ft gay killer who loves chihuahuas) or high-calibre gun-ishment (splatty headshots, shell-cases pirouetting in slo-mo), the choreography is bloody, brutal and believable.

At one point, Statham sticks a fire extinguisher pin through his opponent’s cheek. Now you don’t get that in The King’s Speech.