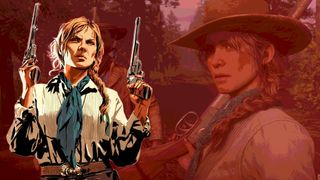 While Arthur Morgan was the grizzled face of Red Dead Redemption 2, Sadie Adler - the tough-talking survivor of the Van Der Linde gang - is its wounded soul. Determined to know more about the woman that had stolen my heart, I spoke to the voice artist Alex McKenna, Rockstar's motion-capture director Rod Edge and Alex's costars.

"I had no idea what I was auditioning for when I first got the call from my agent," says McKenna. "Typically you're given sides [part of a script provided to actors for use in an audition] but they said it was top secret, just to show up, sign something, and read."

McKenna did the audition, got the callback, got another callback, and still had no idea that she was going to be working on one of the most anticipated games of recent times. "I got a call to report to a certain address and I actually didn't know - until I came up in the elevator - that I was working for Rockstar games. I was seeing this logo that I was familiar with and the younger version of myself could have just had a party."

Even then, Rockstar's leakproof development style meant it was still years - years - before she got a fuller picture of Sadie's character and role in the game. "I would say conservatively, it was probably a couple of years in. I didn't know much for the first six months, about anything," she says. "Over time it became clearer and clearer that she was a legitimate character that had a story arc and I got a sense of who she was and where she was going."

Motion-capture director Rod Edge adds that the way Rockstar makes games means that he could be recording scenes, without knowing what was coming next in the story. "More often than you would think I could work with a character like Sadie and think she was fantastic, not really knowing if I'll see her again or not."

Edge adds it's a writer's secret on how big McKenna's part was at the beginning, and that he learns as he goes along with capturing the actors. "But I've got a feeling we've beefed up the character because Alex was so good."

Sadie is such a fascinating character because she starts off as the seemingly stereotypical damsel in distress, before proving through the story that she's anything but. Not only does she become a valuable member of the gang and eventually (spoilers) a kick-ass bounty hunter, she's never used as a simple romantic interest for Arthur to save or salivate over. "She's so feminine but so tough," says Edge. "And it's rare to see that kind of character. She stays true to her story and character, and that makes her all the more fascinating."

"I love playing her because she didn't fall into any stereotypical role," agrees McKenna. "I get asked a lot if I think Sadie is supposed to be Arthur's love interest and frankly I think it's far more interesting that she isn't because she wants to be seen and treated like an equal. They have a real connection but it doesn't need to be sexualized."

Ultimately McKenna's part in the making of the game spanned five years, and she found it hard to say goodbye to the character. "I was actually very emotional," she admits. "I hadn't realized just how much she had impacted me and I didn't want to say goodbye. Because of the way the schedule was set we didn't necessarily know what was coming next at any given time, so there was a lot of this might be the last time. Over that amount of time, working with such incredible people, you develop these bonds and relationships, and it felt like a big family. So it was a bit like leaving home."

Part of the reason it was so emotional - and why the camaraderie feels so real when you play - is that instead of the old fashioned method of recording voices separately in booths, the motion and vocal capture for Red Dead Redemption 2's scenes was more like a theatre or movie production. They worked on a soundstage, acting together, hanging around on set and rehearsing and collaborating with Edge on bringing it all to life.

"It was interesting the relationships that formed out of the characters," says Alex. "They slightly mirror what is happening in the game. I'm very close to Cali Moore who plays Abigail and Roger [Clark, who plays Arthur] and Rob [who plays John Marston]." The cast has been able to meet up since the game was finished, and McKenna has met with Edge too, and McKenna jokes it feels like a real gang, just like the Van Der Linde outlaws.

No one spent more intimate time with Sadie than McKenna, so I ask how they think Sadie's story continues once the Red Dead Redemption 2 ending and epilogue is over. "I think she's adventuring as long as she can," says McKenna. "I don't think it's innate to her essence to settle down.

"I think even her version of settling down was still rather progressive, given that she and her husband treated each other like equals, so she'd be hard pressed after everything that happened to find somebody... whatever settling down means I just don't see it. I do think she continues in the way that best suits her, I don't think there's any compromise. Perhaps she finds a town she likes, and then she just makes sure nobody messes with the women or the school children."

Read more about life behind the scenes on Red Dead Redemption 2 with our interview with the women of Rockstar's western epic.