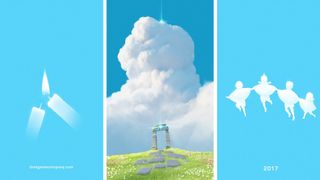 The last game from thatgamecompany (yes, that's actually the name of the studio) was Journey. That was four years ago. But now, it seems the developer is ready to reveal - or at least tease - its next project. Check out this cryptic set of images posted by the company's official Twitter:

We hope you’ll enjoy @thatnextgame, and in the meantime we’re hiring. pic.twitter.com/jkjOclSDAtNovember 1, 2016

Thatgamecompany's previous games (Journey, Flower, Flow) have all had one-word titles, so who's ready to place some bets on this one? "Candle"? "Field"? "Dance"? How about just "confusing"? Because clearly thatgamecompany is trying to tell us something, but we have to break it down. So let's do that.

Two things we do know about thatnextgame: it's multiplayer, and it's coming to multiple platforms - no Sony exclusives this time around. That's straight from the Twitter bio of the account tied to the project, as well as thatgamecompany's own Twitter bio.

So what can two players do in this project? Give, apparently. Not only do we have one image of a candle giving its flame to another, but the very first tweet from @thatnextgame specifically says this will be a game about giving. In Journey, players could see, call to each other, and help one another regenerate faster. This tweet would seem to suggest the studio is working to improve and expand on player interaction.

There's also the fact that thatgamecompany is currently hiring. One position is for a networking engineer, specifically one with background and experience in MMOs. I don't think thatgamecompany is aiming to make the next World of Warcraft, but someone familiar with handling a large number of clients performing complex actions would be of great benefit if the project was indeed looking to improve upon the foundations laid by Journey.

Two of thatgamecompany's previous games have had their soundtracks composed by Austin Wintory, who won a Grammy for, yes, Journey. But thatnextgame will be scored by Vincent Diamante, who scored thatgamecompany's second game, Flower, as well as fighting game Skullgirls. Here's my personal favorite from the Flower soundtrack, "Lazy Daydream":

Lastly, there's an open position for a "Feel Engineer" on thatgamecompany's website, which is sure to raise eyebrows. However, this is basically a fancy name for a user experience designer, meaning that whomever this person is, they'll be responsible for making the product feel pleasant. You know how it felt really good to jump and slide across the dunes in Journey, or float on the breeze in Flower? That's thanks to a UX Designer/Feel Engineer. So the takeaway here is that the game will likely feel as comfortable in your hands as all of thatgamecompany's previous products have.

Now if only we knew this thing's name...