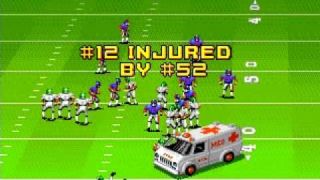 For the best part of 25 years annual sports games have been kicking, slinging and swinging pretend balls, bats and fists across our cathode cubes and plasma boxes. Naturally that period has hosted plenty of innovation, but the need to churn features year after year in order to appear fresh has led to many a decent idea being booted to the dugout, too. Here I commemorate – and celebrate – that 'whambulance', plus 11 other ones that got away…

Two elements of early-‘90s Madden linger in the memory: idiot mates thinking that chucking Hail Marys on every play was a legitimate strategy, and… the ambulance. Oh, the ambulance. Suffer an injury and it would plough onto the field, comedically drive through anything in its path (usually an entire offensive line), pause briefly… and then drive off again, usually without the injured player.

Often rechristened the whambulance, the feature disappeared for good after Madden NFL 2001. “In retrospect, it probably wasn’t the most tasteful thing to celebrate a major injury," a producer told Sports Illustrated in 2014. "And this was in the era before concussion awareness that we have today.” Unlikely to return, then – but it'll always be missed.

Both main football games have experimented with the option to deliberately throw your players to the turf over the years, but FIFA 2001’s dive button (R1) deserves special mention because it could be used both offensively and defensively. Tap it while in control of the ball and your man would go over theatrically; hit it when defending and he'd invoke a filthy tactic such as headbutting an opponent, or crashing into them two-footed. Its loss is understandable given the governing body’s drive for fair play, but for true realism, it really should be brought back.

If we can’t have a sequel to this brilliant PSN effort, at least create a spin-off mode for NHL 19 with power-ups. Two words: Mini. Goalie.

Little-known dev Crimson’s 1998 footballing effort, Viva Football, is mostly rubbish – but its one redeeming feature is a vast catalogue of 1035 teams spanning four decades. Perhaps it was this that inspired EA to include classic sides in FIFA 2000, for one year only. International squads include West Germany 1970, Brazil 1974 and Argentina 1978, while great clubs sides such as Manchester United 1968 and Barca 1992 also star. EA Canada has already shown a willingness to lean on past greats with its collection of Ultimate Team Icons such as Thierry Henry; the next step is a selection of yesteryear’s most memorable teams. Wimbledon 1988 vs Real Madrid 2015? Tasty.

Castello, Ximenes, Miranda, Espinas, Valery – their names were modified with each passing year, but whatever you called them, this fictional five were staples of the default Master League squad during PES’s early-2000s heyday. The idea was to upgrade on them with real players, but parting with any of the fab five often triggered more misery than real-life break-ups.

All were retired at the turn of the decade, but that isn’t to say they couldn’t be brought back. In a world with room for reboots of Ghostbusters, DangerMouse, Uncle Buck and Jumanji – Jumanji starring The Rock and Amy Pond, no less – there’s certainly scope for a few footballers who weren’t real in the first place to come out of retirement. Particularly with one Pro Evo legend, Nigerian forward Tijani Babangina, already reintroduced to the series for PES 2016.

EA Sports UFC 3 is an improvement on its predecessor, but still lacks the polish that brings pay-per-views to life in Undisputed. While it looks similar on the surface, Undisputed’s lifelike presentation of your dream card blows UFC’s vanilla attempt away. This YouTube vid is of poor quality, but nonetheless illustrates the point: we get the proper UFC pay-per-view intro, on-point pre-fight discussion of the combatants from Mike Goldberg and Joe Rogan, and an overall greater sense of build-up ahead of each bout.

There was a time when both NCAA Football and Madden were essential buys year after year, as you could export each season's real draft class from the former to the latter. But NCAA has been on hiatus since three conferences withdrew their trademarks in 2013, and with a legal dispute surrounding player likenesses ongoing, the chances of EA eventually returning to college Gridiron are slim.

Madden, however, simply isn’t the same without its baby sibling. Fake prospects invading the league from year two onwards in career mode is an instant immersion-killer. Why not borrow a move from NBA 2K’s playbook, then, and enable users to create and share their own draft classes? Essentially, it allows third parties to do a job EA can’t for legal reasons, in a similar vein to the way Ashes Cricket circumvents licensing gaps by prompting you to download the best fan-made teams as soon as you load the game. I need Shea Patterson, Dexter Lawrence and Clayton Thorson as scoutable stars in Madden NFL 17, even if I have to put them there myself.

Can a single wrestler sub in for a full feature? When you're one of the 1980s' greatest, absolutely. 'Million Dollar Man' Ted DiBiase is an especially curious case pertaining to this genre, as he has become a mainstay of the WWE 2K series – but only as a non-playable manager.

The 15 WWE 2K18 creations you have to download right now

The last time you could take control of DiBiase as an official character, and put opponents to sleep using his patented Million Dollar Dream sleeperhold, was back in WWE 2K14. Which is crazy, given the beardy one's outstanding in-ring reputation; if you already own have the rights to his likeness, how hard is it to add a moveset and theme tune? For now, you'll have to make do with some (thankfully excellent) fan-created alternatives instead.

Custom draft classes aren't the only great feature that died with NCAA. Also dispatched through virtual sports’ heavenly gates is its fantastic Team Builder feature, with which you can create your ‘school’ (or any other squad of your choosing) online for importing into the game. It was so successful, FIFA adopted the same tech in its later PS3 and Xbox 360 years – only for it to be quietly dropped amid the leap to current-gen. If EA can’t stump up for licensed classic teams, this would be next best option – not only in FIFA, but Madden and NHL too.

Clang, bang, whack, bop, clang, bang, whack, bop... No, not Hanson's 2018 comeback single, but the shot-happy cadence of any FIFA 97 indoor match. This five-a-side footy frenzy was treasured as a couch play favourite, even if tactics rarely went deeper than 'welly it from anywhere!!'. It also helped inspire FIFA Street – making its 20-years-and-counting absence all the more puzzling, and infuriating. What an anniversary present it'd be to see it return in FIFA 19.

One of all-conquering baseball sim MLB: The Show’s best features is the way in which crowd numbers are affected by success. Have a stinker of a season, and late on in the campaign you’ll play in front of a near-empty stadium night after night, like in real life. Madden used to have the same, excellent feature – until one furious manbaby cried to the league.

“We incorporated accurate attendance for all the teams, and Jacksonville always had these terrible turnouts," a former EA Tiburnon producer told Sports Illustrated. "The Jags owner got all pissed off when he heard there were empty seats when you played as his team in the game. The team called the NFL and we had to fix it immediately.” Khan you believe what you're reading?

No sports game has been so consistently great over the past decade as MLB The Show – but there remains one small (huge) feature its EA rival did better. Hitter's Eye sees the baseball change colour as it leaves the pitcher's hand: white for fastball, red for breaking balls, green for off-speed, pink for sinkers and orange for knuckleballs. Timing remains a critical factor in striking the ball, but this is a beautifully simple way of emulating a professional batter ‘reading’ the pitch. I'd love to see it find its way into Sony's big bopper as an alternate control method.

It's 14 years since the greatest American Football game ever made – don't argue – yet still *no* sports game has a half-time show as accomplished as 2K’s legendary NFL finale. Memo to devs everywhere: Watch. Learn. Copy. Please.

Still pondering whether or not to grab this year's Madden? Then check out 9 things you have to know about Madden 18’s ‘Longshot’ story mode – direct from its creator.