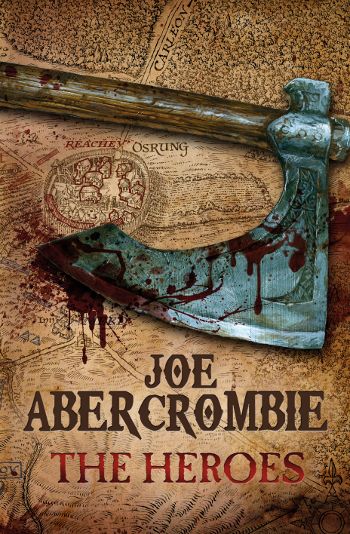 "War is hell, and all that." Even Joe Abercrombie's characters realise that sentiment is trite. But it's no less true for being oft-repeated and The Heroes , his excellent fifth book, is a mud-splattered exploration of just how messy and humiliating a battle can be.

The Union and the Northmen are at war and squaring up to clash over a hilltop henge called The Heroes. Set in the same universe as Abercrombie’s previous books, the story is vividly focussed on three days of fighting. It shifts viewpoint from one camp to the other, equally highlighting examples of cowardice, self-interest and incompetence from both sides. There are scores of vignettes as the perspective flows from one person to another; for instance, we see the general signing an order, then follow the messenger taking it into the valley, then trail the heavies who ambush him as they carry the intercepted message to their commander, and so on. It's an adroit technique which keeps the pace rapid, and which inevitably gives the reader a clearer impression of what's happening on the front line than any of the combatants.

There are six key figures who we come back to time and again; how their personal stories and their desires for redemption, glory or peace intersect form the emotional core of The Heroes. The most compelling is Bremer dan Gorst, the colonel desperate to prove himself after his disgrace in Best Served Cold , burdened with a squeaky voice and unrequited lust for a fellow officer's wife. He's an example of one of the minor characters from previous books who fall into the spotlight this time around. Although The Heroes is a standalone book, it's best read in sequence because people mentioned only in passing before are now major players, while the central cast from previous books, such as Caul Shivers, are reduced to supporting roles. Fleeting references to the Gurkish, Monzcarro Murcatto or the battle of Adua are hardly essential details to this confrontation, but they're part of a bigger picture that rewards those who've been paying attention since 2006's The Blade Itself .

All of this is delivered in Abercrombie's trademark witty style, with room left amid the violence for almost Pratchett-like moments of absurdity, such as the mighty Wirrun of Bligh inventing the cheese sandwich. This is an action-packed novel full of brutality, black humour and razor-sharp characterisation - war might be hell close-up, but from a distance it bubbles with vigorous, ironic appeal.