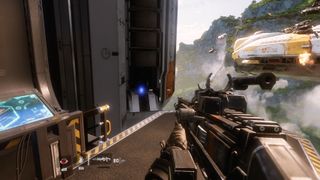 Respawn has been working on a virtual reality first person shooter and they're finally revealing it next month. The Titanfall developer will even have a playable demo for their Oculus exclusive VR title at the end of September during Oculus Connect.

Respawn announced a partnership with Oculus Studios to "create an amazing first person combat experience for VR" back in 2017 in a tweet. There isn't much information out about this new project except for this short video teaser Oculus put out when they first announced their partnership with Respawn. The shooter will be exclusive to the Oculus platform.

The developers at Respawn are the minds behind Titanfall, Apex Legends, and several entries in the Call of Duty franchise (Respawn was created by Infinity Ward founders Jason West and Vince Zampella). Job listings for this new VR title are looking for designers with previous experience in first person shooters with a listing looking for a developer with “experience[d] with first person weapons and full body animations.”

After launching Apex Legends EA, who acquired the studio in 2017, said that more "premium" Titanfall would be coming in 2019 and it isn't this first person virtual reality game.

Oculus Connect takes place on Wednesday, September 25, 2019 through September 26 at the San Jose McEnery Convention Center. It's the sixth year that Oculus has held it with talks and roundtables for industry veterans and "cutting edge tech. Registration is currently open at the Oculus Connect site.

We don't know if this shooter will be set in the Titanfall universe or if it'll be a completely new property. We also aren't sure if it'll be primarily multiplayer or single player, but we'll get more details at the end of September.

While we'll get the reveal in September, Respawn's new game probably won't be out for sometime. Check out all the info we have the Call of Duty: Modern Warfare open beta