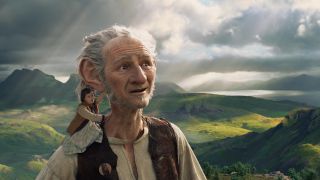 With queues longer than a 24ft giant’s stride and every seat in the house occupied by a potential whizzpopper, there’s little doubt that The BFG was THT (The Hot Ticket) at this year’s Cannes Film Festival. And rightly so. It’s a film that not only sees Steven Spielberg adapt one of the world’s most beloved children’s books, but reunites him with ET screenwriter Melissa Mathison for the first time in 34 years. The reunion was worth the wait – there’s boundless wonder to be found in this gloriumptious Dahl adaptation.

Set initially in a storybook London, seemingly around the time of the novel’s release given that the Queen phones “Nancy” and “Ronnie” at one point, newcomer Ruby Barnhill stars as Sophie – a young orphan who catches the eye of a cloaked figure as tall as a house outside her window one night only to be whisked away to Giant Country. Fortunately for Sophie, the giant that abducts her is one of a kind – a Snozzcumber-scoffing vegetarian – and friendly to boot, going by the name Big Friendly Giant (a mo-cap performance by Mark Rylance).

The BFG can’t let Sophie return to the orphanage for risk of revealing his kind to humanity, but it’s equally dangerous for Sophie to stay in Giant Country where nine bloodthirsty man-eaters, who tower over even the BFG, inch closer and closer to sniffing her out. All the while the BFG continues his work – catching and distributing dreams.

Dahl’s worlds of imagination and wonderment are often done an injustice onscreen, but The BFG is a triumph. Adapted with care, warmth and a respectful hand by the late Mathison (a touching credits dedication simply reads “For Our Melissa”), the script is a delight. It tones down the darkness of Dahl’s prose – the film is missing the book’s macabre opening conversation between the BFG and Sophie where they discuss how different human beans taste, for example – but it’s entirely faithful to the story and broadly faithful to the BFG’s joyous gobblefunk vocabulary.

For well over an hour it’s almost entirely a two-hander between Barnhill and Rylance, the relationship between the BFG and Sophie hitting all the right heartfelt notes. What is initially a relationship of necessity quickly turns into one of genuine friendship and affection – not the easiest thing to convey when it’s a real little girl acting against artfully crafted pixels. At just under two hours the film is in no rush, with languorous scenes where the BFG and Sophie converse about Phizzwizards or Frobscottle. It’s a brave decision, trusting in its characters and actors where a lesser adaptation may have upped the antics to appease the younger audience it’s entirely aimed at.

The Giant Country scenes are lovely, and a lot of fun, but when the BFG eventually makes it to Buckingham Palace the film soars, with a succession of hilarious sight gags as the BFG scoffs a gargantuan breakfast with the Queen. Penelope Wilton is a riot as HRH – almost as enamoured with the BFG as Sophie is, she underplays to brilliant comic effect. It’s difficult to imagine these scenes ever being done better on screen.

Barnhill makes a watchable Sophie – unafraid to admit she’s flawed, but refusing to wallow in her tragic past. She has a captivating determination, but is overshadowed (quite literally) by Mark Rylance’s spindly man mountain. Rylance may have won the Academy Award for his last collaboration with Spielberg, Bridge of Spies, but this is arguably the better performance – actorly tics replaced with genuine human warmth and vulnerability. This is all the more ironic given he’s playing an impossible knife-nosed, saucer-eared giant, cutting edge facial capture conveying the most minute detail in every wide-eyed expression.

Shot by Spielberg’s regular DoP Janusz Kaminski, The BFG is stunning to look at with gorgeous Victoriana production design in the England-set sequences (all cobbled streets and moonlit staircases) while abandoned ferris wheels and colossal stone archways punctuate Giant Country’s rolling green fields. Spielberg conjours up some truly dazzling imagery too – the BFG walking into the misty darkness lit only by a glowing red Trogglehumper, or cutting an evocative silhouette against a golden sunset. Some of the early composition work is a little ropey, and the VFX in general can look unnatural, which isn’t a big problem in a world this fantastical. But hot on the heels of The Jungle Book, another film where a single live action little ‘un spends the bulk of the film playing against entirely CG characters and environments, the joins are a little more apparent.

The only real disappointment are the other nine giants. Jemaine Clement is entertaining enough as cockney ringleader Fleshlumpeater, but the rest are set dressing, neither as grotesque as they are in the book nor as scary as they are in the 1989 animation. They’re oafish buffoons, not monsters, afraid of water and stupendously stupid, which dulls their edge. It also doesn’t strive for the thematic complexity of something like ET, which may make it less rewarding on repeat viewings, but compared to the last big screen Dahl – Tim Burton’s Charlie and the Chocolate Factory – this is in an entirely different league, and an adaptation to savour.