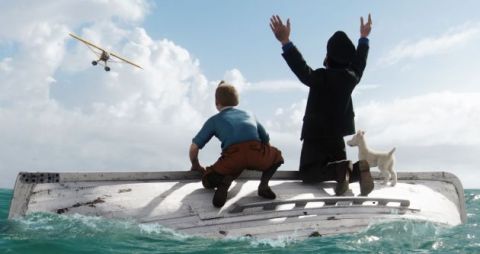 Before he died in 1983, Tintin creator Hergé pegged Steven Spielberg as the director worthiest of adapting his work.

You can see how the Belgian writer/artist would’ve pictured it: the cliffhanging kicks of Indiana Jones sweetened with the winsome wonder of Close Encounters / E.T. He probably didn’t hope for a replay of 1941 ’s knockabout chaos.

No, Spielberg’s latest isn’t down there with his biggest bomb. But there are times when its manic ghost haunts his animated epic.

Spielberg’s version heavily favours the latter, which sounds promising in theory – who needs another blockbuster that’s two-thirds characters explaining stuff to one another? – but in practice means a movie that doesn’t quite know when to ease off the pedal.

It’s a mash-up of three ’40s Tintin stories ( The Secret Of The Unicorn , The Crab With The Golden Claws , Red Rackham’s Treasure ) that finds the eponymous man-boy reporter (Jamie Bell in breathless boy-scout mode) crossing sand, sea and city in pursuit of treasure linked to the ancestry of sozzled sea-dog Captain Haddock (Andy Serkis).

Perhaps it’s the distraction of the performance-capture visuals; not only their uncanny-valley-ness (sadly, Tintin himself is the most shark-eyed) but the lack of a greatly compelling reason why this couldn’t have been live action. With one huge exception: an up, down and all-around chase sequence executed in one impossible, continuous shot that brings the excitement to a dizzy peak.

And while there’s no strong emotional hook to hang the pile-driving narrative on, Bell at least dilutes some of the prim pedantry of his ink-and-watercolour counterpart.

As ever, mo-cap maven Serkis makes his presence felt through the pixels, and Simon Pegg and Nick Frost sneak a few laughs as moustachioed bumblers Thompson and Thomson.

Daniel Craig sneers and snarls as urbane baddie Sakharine, yet the character comes across more as a vaguely irate geography teacher than a deadly rogue.

Still, if there’s an absence of menace there’s an abundance of cute, in the form of Tintin’s loyal terrier pal Snowy, who’s pick-up-and-hug loveable and claims the best background gags. He also bags the final shot of the final scene – a so-so set-up for a sequel you hope will fix its glassy eye on soul as well as spectacle.