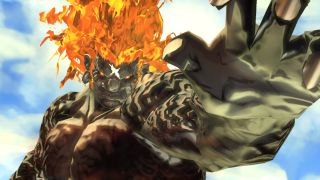 You play Zelda to feel warmth and love and optimism beneath sunny skies and in green fields, to live the life of a legendary boy who rides horses and saves villages and OH MY GOD WHAT THE HECK IS THAT THING. Nightmare creatures with names such as Blind, The Imprisoned, or Demise belong in the likes of Resident Evil, Dark Souls and giant cross-dimensional whirlpools at the bottom of the ocean. But not with Nintendo. Not a collective that thinks evil is a fat man in dungarees who likes gold.

Brain-haunting bosses wriggle and writhe just under the still surface of Zelda’s tranquil waters, automatically suppressed by our minds like traumatic memories because of how awful they are. No wonder Link never speaks: he’s in a permanent state of shellshock, processing his grief only in pained cries of “Hyah!” In that case, then, consider this therapy. I apologise for what I’m about to reawaken.

This rotting shadow beast is black and purple like an angry bruise, his muscular frame leaving no room for misinterpretation as to his favourite hobby: squashing punks under giant sweaty palms (although he also looks like the corpse of a student who died mid-keg stand). Prior to the events of Ocarina, Impa sealed Bongo Bongo in a well under Kakariko village, but he broke out when Ganondorf seized power and set everything on fire. Link’s battle with him takes place on a massive pair of bongos which gives the encounter a rhythmic quality: time attacks in tempo and send him into a frenzied drum roll. One theory suggests Bongo Bongo is a former villager executed for treason and thrown down the well - this explains his crude decapitation, and the various torture devices scattered about.

Game: A Link to the Past

This former thief chief operated out of Kakariko Village before stumbling onto a portal into the Dark World, wherein Gannon saw his light-fingered credentials and appointed him guard of the Thieves’ Town dungeon. He disguises himself as the maiden Link is sent to rescue there, and when Link leads her/him into the light, she/he reveals herself/himself: a broad-shouldered, trench-coat-wearing dude who looks like Resident Evil’s Nemesis, only worse because he throws disembodied heads at you. There’s something horribly reductive about an enemy who can't see known only as Blind, like calling a dude who sweats a lot Sweat, or something. Here’s a lesson in not defining people by their disability.

Link actually fights The Imprisoned over three rounds because it’s so durable, like one hundred boxers melded together and covered in scales. The aim is to stop this killer whale with legs rampaging up a spiral path and escaping its sinkhole by slashing its globular toes so it falls over in a clumsy heap. Which, if I’m honest, makes me feel a bit sorry for the Monsters Inc. reject. Although armless, it’s far from harmless. *Zelda treasure chest jingle plays*. “The monster has evolved to an immensely powerful state,” says your assistant, Fi. “I calculate the odds you will defeat it by sword alone at approximately 0%” She’s right: as if its first form isn’t horrifying enough, subsequent encounters get difficult when it starts growing weird appendages, and even starts to fly. So, what was it imprisoning? Check the next slide.

The final boss of Skyward Sword is basically Ghost Rider covered in ticks. He charges his massive thorny sword before unleashing crackling blue electricity on Link, so make sure not to carry a highly conductive iron shield in with you because it’ll get you fried. Finally, science class pays off. Although he looks like the amalgamation of all fears rolled into one and set on fire (a pinch of The Imprisoned, a smidgen of Ganondorf, a smear of athlete’s foot), he’s actually scared of insects: whip out a bug net during the battle and he pulls his punches. Feature, or literal bug?

Slimy skin, tentacles, massive teeth - congratulations, Nintendo, we can never have unagi again. According to the story, this originally docile giant eel turned evil by ingesting powerful shadow magic, which you should never do, even when hungover, and even when an eel. The entire battle takes place in this creature’s sandy undersea domain, as Link uses his clawshot to pluck a lone eye from its gelatinous appendages and slash repeatedly. Dodge the school of bomb fish Morpheel unleashes in retaliation and continue to snatch out its bloodshot seeing-orb (by that we mean ‘eye’, we just didn’t want to use the word ‘eye’ again because it’s bad style), and the marauding marine creature writhes in pain, eventually smashing a wall and drying out as his base drains of water. Thanks for the tasty shadow magic, mmm.

You discover Facade in the Face Shrine, which is apt, as there’s nothing to him but a ghostly mug. Not even a head. As soon as you walk into the room, two eyes and a gaping mouth appear on the floor under your feet, putting you in direct physical contact with Facade in ways that immediately violate Link’s strict ‘no touching’ policy. It’s the worst realisation of your fears about someone hacking into your webcam and watching you sleep, except here the privacy invader chucks pots about using the power of telepathy and cackles annoyingly. It’s an easy fight in the end though, Link achieving victory by leaving bombs on his face. Easy when, at the end of the day, we’re people and Facade is a floor.

The spine. Possibly the scariest bone in the body, a column of interlocking ridges that contains all our vital nerves and a reminder we’re basically just centipedes with a few extra bits. Skeldritch is wise to this and cuts out the middleman (i.e. limbs), consolidating his vertebrae into one manageable instalment and covering it in thick metal armour. As if being so enviously big as to bestride both of the 3DS’s screens wasn’t enough, he wears a viking helmet to protect his cranium, which is arguably even more important than the spine itself. Link must use the touchpad to raise sand and block Skeldritch’s cannonballs, dodge his coccyx laser, then smash his ruby brain apart in such a way as to make you appreciate having arms.

First comes Majora, then comes Majora’s Incarnation, then, when you’re really sick of hearing the word Majora and it starts to lose all meaning, comes the final manifestation of this tricksy shape-shifter: Majora’s Wrath. It’s those weird whips that make him truly disconcerting, the way they appear to protrude from his body like natural extensions of his blood-filled arteries. In the manga, Link dons his Fierce Deity Mask and kills Majora's Wrath in one blow, but it takes more effort here as you dodge erratic twirls and flails while he yelps like a dog whose tail has just been stepped on. You can just picture the wet sounds those vein-things would make on bare skin, like being slapped by heavy noodles.

More obviously untrustworthy than the Leatherface clan. You encounter the first sister on a Ghost Ship when she sweetly asks you to rescue the rest of her siblings. One by one they feed you crap tips, like how not to shoot reaplings in the back with arrows (it’s the main way you defeat them), and telling you to open treasure chests filled with rupoors (black-tinted rupees that drain your cash balance). When you reunite the Diabolical Cubus Sisters, they show thanks by disrobing to reveal hideous grinning stares and launching fizzing energy balls your way for rally upon rally of dead man’s volley. They do reluctantly cough up a useful key when you beat them, though, which is more than Leatherface would do.

Game: The Adventure Of Link

The Palace On The Sea boss is a… bull? That’s like putting a jellyfish in charge of the Earth Temple. Interestingly, he’s exclusive to the game’s American version. In the Japanese original, this boss fight takes place against Helmethead, who’s entirely less fearsome. While official artwork makes The Goomster look like a bow-legged Brock Lesnar crossed with a cow, he doesn’t present an all that difficult foe, predictable and easy enough to dodge with the jump spell. Incidentally, don’t confuse Gooma with the Goomba named Gooma from Paper Mario, who is a mushroom named after a portmanteau of ‘Goomba’ and ‘grandma’. Actually I’ve just decided you can if you want because none of this matters.