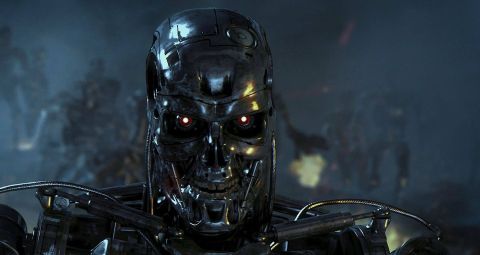 “Time-travel makes my head hurt,” yells Kyle Reese, midway through the mindbending Terminator Genisys. His words are sure to be echoed by a good few viewers.

With an alternate timeline wiping out most of what you know about Skynet, Sarah Connor and those deadly Terminators, this fifth instalment is easily the most headscratching of a franchise already built on Möbius-strip logic. But, with the welcome return of Arnold Schwarzenegger, this Alan Taylor-directed effort is a vast improvement on McG’s Salvation and Rise Of The Machines.

We begin with Reese (Jai Courtney) recapping: how defence program Skynet went sentient, how Judgement Day came in 1997, how the machines took over, how the humans fought back. The year is now 2029, and Reese volunteers to time-travel back to 1984 to protect the future mother of resistance leader John Connor (Jason Clarke), after Skynet sends a T-800 Terminator (Arnold Schwarzenegger, de-wrinkled thanks to digital trickery) back to kill her.

So far, so James Cameron – but that’s where the similarities to the director’s 1984 classic The Terminator ends.

When Reese arrives back in the mid-’80s (naked, of course), things aren’t how you remember them. For starters, John Connor’s mother Sarah (Emilia Clarke) is well aware of the Terminators, unlike Linda Hamilton in the original. She even has her own ageing T-800 (Arnie, again) – or ‘Pops’ as she calls him – to protect her. Turns out he was sent back to 1973, when she was nine, to look after her, staying with her ever since.

While Sarah and Arnie’s T-800 despatch the younger Terminator that’s come back through time, there’s another problem: a shape-shifting T-1000 (I Saw The Devil’s Byung-hun Lee, excellent), even dressed as a cop to remind us of Robert Patrick’s liquid-metal Terminator in Cameron’s 1991 bar-setting T2. As the trio fight off the T-1000, the first third is relentless – and arguably the most fun part of the film – playing out on freeways, and in cop shops, shopping malls and abandoned factories.

But then the plot really thickens. The twist – or one of them – is that Terminator Genisys is really Kyle Reese’s story. This time, the protector of Sarah Connor – who is sent back in time by her son John to ultimately father him – is having flashbacks to a sun-dappled past he never knew. In this alternate past/future, Judgement Day never happened. But Genisys will. “The ultimate killer app,” it’s a Skynet-sponsored Trojan Horse, set to launch in 2017, to link all our tech-gadgets and leave unsuspecting users vulnerable to attack.

Yet this doesn’t even begin to cover a plot so dense that even the trailer succumbs to spoilers. The complexity’s hinted at early on when Matt Smith’s mystery man pops up to attack John Connor as Reese is sent back to 1984. Thank heavens then for J.K. Simmons’ detective, who brings some much-needed humour to the “really, really complicated” story. Told that Reese and co are here to save the world, he quips: “I can work with that.”

What doesn’t work quite as well is the Arnie humour, not least a tiresome running gag where he tries to “blend in” by smiling. The obligatory “I’ll be back” line is casually used and dismissed, though this model prefers “bite me” as a signature phrase. Better are the references to his ageing appearance; explained with the idea that a Terminator’s flesh ages just like a human’s, it gives this T-800 (and its actor) a creaky look. “I’m old,” he says. “Not obsolete.”

Schwarzenegger’s return is vital, of course, after his CGI cameo in Terminator Salvation, and his relationship with Sarah does provide some emotional heft. Clarke is excellent: action-adept and able to convey her attachment towards her ‘Pops’ amid the constant rush of plot. Courtney, too, is a worthy successor to Michael Biehn from the Cameron original (a nice touch even has him dress up in the same trench coat when he first arrives back in 1984).

Indeed, there are numerous points when the script by Patrick Lussier and Laeta Kalogridis feels like a Greatest Hits, as if the earlier movies have criss-crossed together like the plot’s overlapping time-lines. Is it smart meta-writing? Or simply ripping off the originals? Arguably it’s both. But at least the script attempts something brave; in a franchise where the time-travel element has always been a Class A head-shag, this takes things to a whole new level.

Thankfully, Taylor – as he did in Thor: The Dark World – proves capable of keeping this 10-ton juggernaut of an action movie running at full pelt. Whether it’s watching Arnie smashing windscreens, a school bus somersaulting or some set-piece spectacle involving the Golden Gate Bridge, the polished visuals are ample distraction from the time-travel shenanigans.

Sadly, the ending has one WTF moment that lacks credibility, even in this logic-defying loopy universe. But by then, you’ll have most likely given in – and just accepted this as the barmiest Terminator yet.