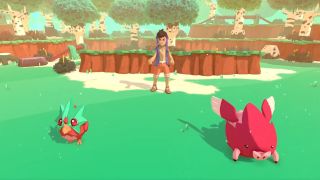 You might not have heard of Temtem before, but if you like Pokemon, you're about to find this new indie game becoming your next obsession and there's a free Temtem stress test this weekend. This new massively multiplayer creature-collection game is as close to Pokemon as Nintendo will legally allow, and may actually be an evolution of the beloved series in some ways. But don't take our word for it, you can get early access to the game via this weekend's Temtem stress test.

There has already been a closed Temtem alpha, which wrapped up on January 9, but you can still sign up for and access the Temtem stress test.

How to get in the TemTem stress test

Head over to the official Temtem website and whack your email in the box where it asks whether you want to 'sign-up for the pre-release stress test'.

You'll then be send a Steam key, which will get you access to the Temtem stress test.

There are two more Temtem stress tests between now and the Early Access release date on January 21, which will let you get a couple of hours of access to the game for free.

The Temtem stress test will give you access to the same content as the game's alpha, which basically gives you a limited time to play as much of the full game as you can.

I mean, just take a look at this trailer and tell me you don't want to play it:

Temtem launches on Steam in early access on January 21, so if the game is your bag, you don't have long to wait until you can add it to your Steam library permanently.

And if you want to know more about Temtem, check out our alpha impressions, where we discovered that Temtem is both a love letter and a challenger to Pokemon.