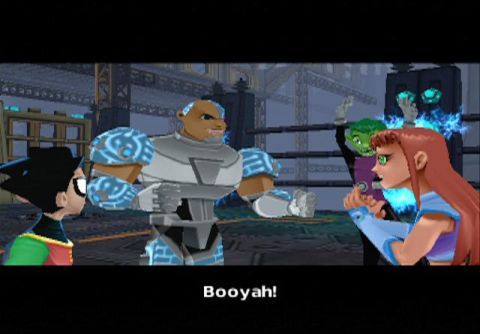 Teen Titans is an interesting example of the constant tug-of-war between quantity and quality. On the one hand, this multiplayer brawler does a serviceable job of emulating the aesthetics of the canceled television program and comic - thin cartoon lines, high-contrast palette and vocal talent from the show's cast. On the other, it throws wave after wave of same-y, jerkily moving dunces in front of you, each of which is easily dispatched in one bloodless slap-fight after another.

Which is not to say that Teen Titans is bad, exactly; it's just as pedestrian as a game about teenage superheroes can be and still remain somewhat enjoyable. Although there are fun moments when new enemies are introduced - insanely cute exploding bunny rabbits, for instance - the vast majority of the time you're simply beating down another generic goon on the road to another simplistic boss fight.

Sure, there's a whole bunch of unlockable combination moves for each character, spooling strong, fast and special attacks together, but with a few notable exceptions (Beast Boy can turn into a bunch of different animals, accompanied by goofy sound effects), they amount to little more than yet another flavor of kick, punch or energy blast. You can pick up barrels and debris to heave at goons, but they don't usually do enough damage to bother.